In case you didn’t get enough of sufganiyot in yesterday's review of Ne'eman's doughnuts or maybe you don’t have a Ne'eman's bakery near you, today as promised in my review of the supermarket doughnuts, I'll tell you about some of Roladin's sufganiyot.

No I'm not helping out Elie Klein with his "Dough For Donuts" campaign by eating some sufganiyot for him :) If you want to know more about Elie's charity fundraiser, check out the interview Rafi at Life in Israel blog did with him or Elie's facebook page and get all the details about Dough for Donuts, now on to my review of the Roladin sufganiyot. 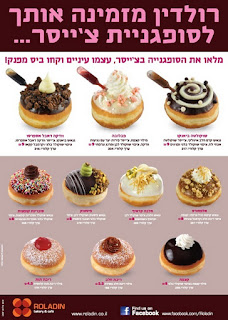 At Roladin you can choose from ten doughnuts this Chanukah season. Three of them are extra special and come with a "chaser" attached to it. Those are the three doughnuts I decided to taste from Roladin's line of Sufganiyot this year.

Roladin's three chaser sufganiyot are all made with the same base doughnut that Roladin uses for their full line of doughnuts. I tasted them when they were extremely fresh, literally as soon as they came out of the kitchen. I found the doughnut itself to be fairly doughy. I think I would've left them in the oil for a drop longer to bake a bit more. I personally liked Ne'eman's base doughnut better than Roladin's but as I read other reviews, I saw that many people disagree with me on that. I wouldn't say Roladin's base was awful, not at all, I just liked Ne'eman's better. I agree with those that say the Roladin doughnut is an - OK to good- neutral base to elaborate on, just far from my favorite.


Size-wise all three of the Roladin chaser doughnuts I got were about 6.5-7cm in diameter.

The chaser comes in a small plastic syringe-type tube that you can squeeze to release the liquid into the doughnut, as much or as little as you want, as you eat the pastry. I liked the idea that you decided what parts of the doughnut will have the extra flavor it doesn’t have to be just the spot where they put the syringe.


Chocolate Bianco
This first doughnut is filled with an Italian milk cream ganache, coated with Belgian milk-chocolate, sprinkled with white & milk-chocolate pearls and has a chocolate and hazelnut chaser attached to it. 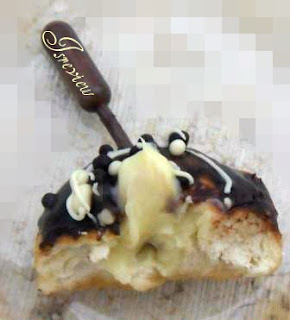 They were very generous with the amount of the milk cream ganache filling they put in and on top of the doughnut. That was a good thing because I liked the taste and texture of this smooth and thick milk cream ganache. I thought the milk-chocolate coating was the perfect contrast to the custard-like milky cream.


To me the small pearls on top added a nice little crunch.


The chocolate and hazelnut chaser was an enjoyable "cherry on top". I tasted the hint of liquor in the chaser but was glad that it wasn't too strong of a liquor taste. Still I thought it added an extra "something" to this already elaborate sufganiyah.


I'd say all the flavors in and on this doughnut really complimented one another. If you want something extremely special on Chanukah this 317 calorie doughnut may be a nice treat to indulge in.


Vodka Double Espresso
This doughnut is for the coffee and chocolate lovers in the crowd. It's filled with a Bianco genache, has a vodka double espresso chaser, is coated in Belgian chocolate and sprinkled with a cocoa crumble. 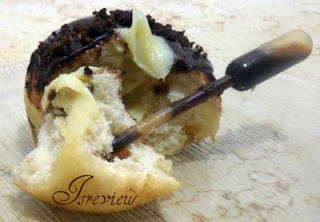 I thought the genache filling was very similar to the last doughnut I just wrote about. Maybe that first one was a bit more "milky" than this one but if I didn’t have them side by side I don't think I would have been able to really tell a difference. Again this ganache filling was wonderfully creamy and pudding-like. It was an enjoyable contrast to the chocolate and coffee flavors it was paired with.


Roladin was again generous with the amount of filling they put in and on this doughnut.

I think the vodka double espresso chaser had a bit of a stronger alcoholic taste to it than the chocolate hazelnut one. There was no doubt in my mind that there was liquor in it but given the espresso flavor and the plain doughnut base I didn’t think it was too strong. I liked how the alcohol gave the doughnut an extra little "kick" but I didn't think they went too overboard.


The cocoa crumble on top added a nice rich chocolate flavor that really worked well with all the other flavors on this doughnut. It also added a very gentle granulated sugar texture that I enjoyed.


Even though I'm not a huge fan of espresso/coffee flavored pastries I did enjoy this rice coffee chocolaty doughnut. Again I thought Roladin did a good job combining a few flavors that really worked well together. At 316 calories it was an elaborate and rich sufganiyah.

Berry Pavlova
This doughnut has a whipped cream filling and a wild berry vodka chaser. It's coated in white chocolate and sprinkled with white and pink French meringue bits. 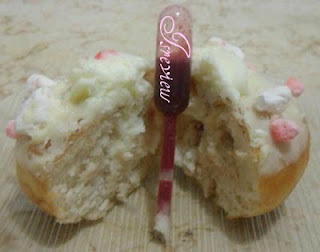 Again there was a fairly generous amount of filling in this doughnut. I thought the whipped cream filling was light and fluffy but had a slight waxy margarine-like aftertaste that I didn’t care for. I kind of missed the thicker custard-like texture of the other two doughnuts but my friend who also tasted this doughnut actually much preferred the light airiness of this filling and didn’t pick up on the waxy taste I mentioned.
Since of the three this was the doughnut she chose to buy and it was her favorite of the chaser doughnut, I'll give you her full review.


As a general rule my friend really enjoys berry flavored treats. She thought the flavors of this Berry Pavlova doughnut all worked extremely well together. She said "the berry chaser was very nice and enjoyable". She didn’t think it had too strong of a vodka taste but she absolutely noticed the touch of alcohol in it. For her the chaser was a pleasant and tasty addition to the doughnut.


She liked the white-chocolate coating and was glad it was a soft chocolate coating and not a hardened one. She mentioned that, although her doughnut had a good amount of the French meringue bits on it she wouldn’t have minded having even more of them. They sort of melt in your mouth and add a nice texture. She thought some people may find the added meringue bits a little too sweet, her self-proclaimed super sweet tooth didn’t.


As a whole she really enjoyed this Berry Pavlova sufganiyah and said "for my one doughnut splurge this Chanukah season it was worth the 304 calories to me, now how about we go run a good couple of miles :)"

Bottom Line: Even though Roladin's Chaser Sufganiyot might just be a creative and fun gimmick I still enjoyed the flavors Roladin though up and combined for each one. In my opinion the different elements and flavors really worked well together. Still, as with almost everything I ever reviewed from Roladin, I thought these lightly "alcoholic" sufganiyot were overpriced; 9.00 NIS for a doughnut, no matter how fancy it may be, is more than I think its worth.

Disclaimer: All items were purchased by me. No one is paying me for this review. All opinions are my own.
Posted by Isreview at 12:19 PM