The other day I was walking by a Roladin and noticed cupcakes in the display window. I don’t go to Roladin that often so I was not sure if it was a new line for them or something that I just had not noticed before. I asked the sales person and he said they are new, so I thought I would treat myself and report back to you guys.

There were a few options to choose from but surprisingly the guy serving me had no idea what flavors each one was. I was even more surprised they did not have a “flyer” detailing each option; as Roladin normally has when they come out with a new or seasonal line. Since the server was of no help I chose the one that looked the most interesting and elaborate to me at that moment. It was a chocolate cupcake topped with a mountain of white cream covered in chocolate sauce/syrup then sprinkled with mini marshmallows.


When I got home I tried it and was extremely disappointed. The chocolate cupcake had mini chocolate bits in it, nice, but the cupcake itself was stale and dry. Had I still been near the bakery I would have gone back and returned it; that’s how stale it was. I have no way of knowing how long it was sitting in the display case but the employees should know and they should not be serving stale cake. 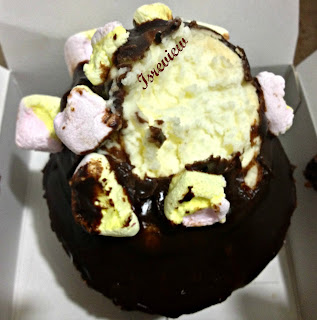 If I had to guess I would say the cream was a version of a Bavarian Cream. The truth is it was an enjoyable cream in and of itself. It was fluffy but not too airy, sweet but not too sweet. The problem was the flavors did not blend well together; somehow the chocolate sauce, cream, marshmallows and cake just did not suit one another at all in my opinion. Something about the combination just didn’t work for me.

Price: I know Roladin is on the more expensive side and often it’s not justified, this time was no exception. In my opinion this (granted) larger cupcake was surely not worth the 15NIS I paid for it.

Bottom Line: I guess “Looks can be deceiving” This Roladin cupcake was a major disappointment for me. Maybe if it had been fresh, not stale, I would be writing a very different review but “as is” I really didn’t enjoy this expensive dessert. Had I known what each cupcakes’ flavor was I may have chosen a different one but for now, unless I know the cupcakes just came out of the oven, I do not plan on trying any of the other options.

Disclaimer: All items were purchased by me. No one is paying me for this review. All opinions are my own.
Posted by Isreview at 1:24 PM