You may know from my recent review of Loacker's Quadratini Vanilla Wafers that I'm a "fan" of Loacker's wafers so when I saw these new Loacker Milk & Cereals and Choco & Nuts Wafer Snacks I was excited to try them.


The wafer part of both snacks was perfect, thin and crispy, just what I have come to expect from a Loacker product. 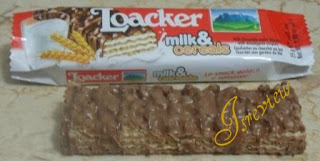 Not surprisingly the milk-chocolate coating on both wafers was completely soft and melted. Even thought today is September 1st it's still hot enough here in Israel to make a big melted mess of chocolate coated wafers. Although they were melted I still really enjoyed it. The milk-chocolate on each wafer was tasty, rich and creamy. 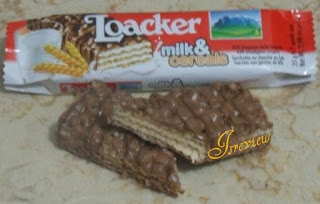 I could absolutely taste the milk cream in the filling of the Milk & Cereal wafer. I thought it was a nice smooth and light contrast to the richer milk-chocolate coating.

The chocolate cream in the Choco & Nuts wafer tasted like a richer dark-chocolate to me. Being the dark chocolate addict that I am I enjoyed this wafer even more than the Milk & Cereal wafer. Again I could have done without the added chopped hazelnuts but, I do have to admit, that like with the crispy wheat-germ the chopped hazelnuts did add texture and hazelnut flavor to this treat.  I'm sure many people will enjoy that.


Bottom Line :Loacker Milk & Cereal and Choco & Nut Wafer Snacks live up to the quality and taste I have come to expect from Loacker wafers. I may just wait until the weather cools off so the milk-chocolate coating will not be melted, before I treat myself to anymore of their rich dark-chocolate tasting Choco & Nuts wafer, seeing as that’s the one I liked best.