Shush is Elite's version of Osem's Bamba snack. In case you don’t know what Bamba is, it's a peanut butter-flavored puffed corn snack. I think it's the most popular kids snack here in Israel. I've heard that Bamba is often the first "solid food" for many Israeli kids.


Sometime ago, Osem introduced a nougat filled and a Chalva filled Bamba. So now Elite is trying to "compete" with those snacks and have introduced a chocolate cream filled Shush.

In my opinion, and based on countrywide sales, Bamba is just that much tastier and better than Elite's Shush, to start with. The texture of the puffed corn is slightly softer and the flavor of the peanut butter is just a bit better. I also think Osem is a little more "generous" with the amount of peanut butter they put on their puffed corn. So even before you add the cream fillings I'd say Osem started off with a better "base".

The chocolate cream filling of the Shush snack was fine. I didn’t hate it or love it. It tasted like a "run of the mill" Elite chocolate spread.  Still, I actually much preferred the softer and lighter nougat cream in Osem's Bamba treat. 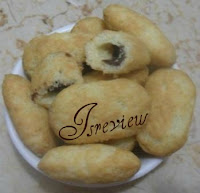 Both bags have the same amount of snack in them 60 grams. Osem's version cost 4.79 NIS whereas Elite's Shushim Chocolate cost 3.49 NIS. I think that's still more than a little snack pack should cost but, if you're going to be buying one or the other, and your kids aren't specifically "addicted" to Osem's Bamba, I think you can totally save the 1.30 NIS per bag and buy Elite's Shushim instead.
Bottom Line: I like the sweet and salty contrast you get from mixing peanut butter and chocolate and I don’t think that Elite did a "bad job" per se with their new Chocolate filled Shushim but personally I still prefer the product I think they were trying to compete with; Osem's nougat filled Bamba.


Disclaimer: All items were purchased by me. No one is paying me for this review. All opinions are my own.
Posted by Isreview at 2:38 PM