Sucrazit, one of Israel’s leading sugar substitute companies, have finally gotten on board and came out with a Stievia based sweetener in packets. For years now I have been looking for a convenient stevia based sweetener here in Israel. I was able to find dried stevia leaves or a liquid alcohol based one but those did not suit my needs. I ended up buying stevia packets from overseas but now finally they are available here, from Sucrazit. They can be found at many of the major supermarkets most likely in the “health food” department.

In case you’re unfamiliar with what stevia is here is a rundown from Wikipedia:

“Stevia is a genus of about 240 species of herbs and shrubs in the sunflower family (Asteraceae), native to subtropical and tropical regions from western North America to South America. The species Stevia rebaudiana, commonly known as sweetleaf, sweet leaf, sugarleaf, or simply stevia, is widely grown for its sweet leaves. As a sweetener and sugar substitute, stevia's taste has a slower onset and longer duration than that of sugar, although some of its extracts may have a bitter or licorice-like aftertaste at high concentrations.

With its steviol glycoside extracts having up to 300 times the sweetness of sugar; stevia has garnered attention with the rise in demand for low-carbohydrate, low-sugar food alternatives. Because stevia has a negligible effect on blood glucose, it is attractive as a natural sweetener to people on carbohydrate-controlled diets.

The availability of stevia varies from country to country. In a few countries, it has been available as a sweetener for decades or centuries; for example, stevia is widely used as a sweetener in Japan where it has been available for decades. In some countries health concerns and political controversies have limited its availability; for example, the United States banned stevia in the early 1990s unless labeled as a dietary supplement, but in 2008 approved rebaudioside A extract as a food additive. Over the years, the number of countries in which stevia is available as a sweetener has been increasing. In 2011, stevia was approved for use in the EU starting in early December, 2011” 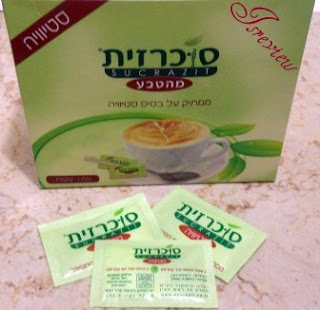 I added a packet of Sucrazit’s Stevia to my tea this morning and it seemed to be exactly the same as the packets I had bought from overseas. Yes stevia is like 300 times sweeter than sugar so only a very little bit is needed to sweeten a cup of tea, or anything for that matter, but the one gram packet I used was the perfect amount for me.

Stevia does not taste like sugar. Its sweet but it has a taste of its own that took me time to get used to. I didn’t like it at first but now if I use the correct (tiny) amount I don’t mind it. My suggestion is start off with way less than you think you want or need to see if you are OK with the taste and if it sweetens enough for your likening.

There are cookbooks and recipes available on line or in bookstores for all sorts of ways to use stevia in baking and cooking to replace sugar or sweetener. It took me time to perfect cakes and other items but with trial and error I did manage to get a few recipes that I enjoyed. Others who had never tasted stevia didn’t really like what I made at first so yes it’s a taste most need to “get used to” in order to enjoy.

Not only is stevia a natural plant and therefore not an artificial chemical concoction, like most sugar substituted available here, but studies have shown that stevia can possibly be good for you and beneficial for diabetics.

Back to Wikipedia for that information:

In relation to diabetes, studies have shown stevia to have a re-vitalizing effect on β-cells of pancreas, improve insulin sensitivity in rats, and possibly even to promote additional insulin production, helping to reverse diabetes and metabolic syndrome. Stevia consumed before meals significantly reduced postprandial insulin levels compared to both aspartame and sucrose. A 2011 review study concluded that Stevia sweeteners would likely benefit diabetic patients”

It goes without saying that if you have diabetes or any other health issues you should talk to your doctor or health care professional before you try this or any such product.

Aside from stevia these packets also contain Dextrose which is another name for glucose, D-glucose, or grape sugar.

Bottom Line: I’m happy to finally see stevia packets easily available here in Israel. I know not everyone will like the taste and after taste it has. I for one have a harder time dealing with the taste and aftertaste of most other sugar substitutes. Plus I can never get over the fact that most of those are made of chemicals that are not good for me. If you know and like stevia you should be just as happy with Sucrazit’s version as you are with any brand you may have been buying from overseas.


Disclaimer: All items were purchased by me.  No one is paying me for this review. All opinions are my own
Posted by Isreview at 2:16 PM

Email ThisBlogThis!Share to TwitterShare to FacebookShare to Pinterest
Labels: sweetener