Shortly before I began this blog most of the deli-meat companies, here in Israel, started selling an extra thin sliced deli-meat. Each company gave it a slightly different name but in reality they were all basically the same product.

Soglowek, one of Tirat Tzvis competitors, even received a Product of the Year Award for their version. I actually enjoyed the extra thin sliced deli-meat and thought it was a nice new twist on a popular product.

Now Tirat Tzvi is looking for their next NEW product, after the Toast-Ready Cold-Cut, I reviewed in February. 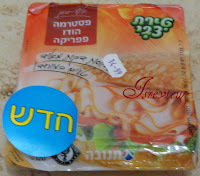 For this "NEW" Thin-Sliced Deli-Meat, it seems to me, that all they did was move the number on the slicer a notch or 2 up from the extra thin slice setting, putting it somewhere between the regular cut and the extra thin cut and "voilà" they claim to have a new product!!

There are 4 meats to choose from in this line of "new" thin cold-cuts; Grilled Turkey 1% fat, Romanian style Turkey, Paprika flavored Turkey and Italian Smoked Salami

I tried the Paprika flavored Turkey.

It tasted perfectly fine to me, and I enjoyed it, but I think it's somewhat ridiculous to claim it’s a new product. Maybe call it a new cut but not a new product. 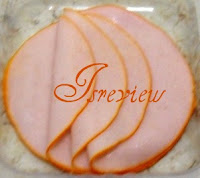 This new gimmick is only being sold as "individual" packages. They are 120 grams per package. Exactly the same amount as Tirat Tzvi's extra thin sliced deli-meat, but these are being called "individual" packs.

I don’t think that 120 grams is an individual serving. It seems too much for one sandwich/serving and you don’t have a proper cover to re-close the package for next time.

It also ends up being much more expensive than buying a full size package of the regular sliced Tirat Tzvi deli-meat.

I know other companies also put 120 grams of deli-meat in their "so called" individual serving pack so it's not only Tirat Tzvi that I can fault for this.

Bottom Line: Tirat Tzvi's New Thin Sliced Deli-Meat was enjoyable enough and tasty, but I don’t think it warrants being called a new product. Aside from which, the packaging bothered me too. I am not likely to buy it again.

Update: Winner of 2012 Product of the Year Award Israel

Disclaimer: All items were purchased by me. No one is paying me for this review. All opinions are my own.
Posted by Isreview at 2:55 PM

Email ThisBlogThis!Share to TwitterShare to FacebookShare to Pinterest
Labels: meat