As I was cleaning out the freezer, just now, I found this Klik Ice Cream Snack and I realized that I never wrote the blog post about it. So although this Klik ice cream snack is not Kosher for Pesach I thought I would just give you a quick post about in case you see it in the store freezer as your out and about this week before  Pesach with the kids and wonder if it’s worth buying. So here goes…

This ice cream snack is made of vanilla ice cream covered in milk chocolate that has some rice crispy type cereal bits scattered about. Not as many as it seems from the photo on the bag but hay that’s not news often the packaging does not realistically represent what you will be getting in the package.

You get 8 chocolate covered bite size ice cream bits in the baggie.

I found it messy to eat them because they started melting a little as I was holding the bag. They aren’t like M&Ms that “melt in your mouth, not in your hands”. They are ice cream and they start melting right away so I got chocolate all over my fingers when I put my hand back into the bag to get another snack out. I didn’t like that. 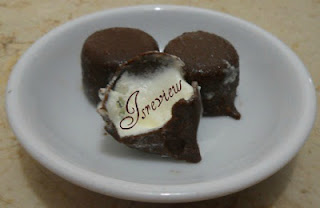 I thought the chocolate was chalky and gritty and, as you may know by now from reading other posts of mine, that’s something I really don’t enjoy. The scattered cereal bits kinda made the grittiness even more prevalent so that addition  turned out to be a negative for me and not the positive I thought it would be.

The ice cream itself was mediocre at best, more ice than cream. The ice cream part was actually more enjoyable as it melted than it was frozen but it was by no means a rich or quality ice cream. Then again it wasn’t awful.

Now for a child’s opinion, my neighbor’s kids were playing in the garden so I gave them the rest of the package to finish up. They both smiled and said thank you. I asked them what they thought of it, their reply was “yummy but can we wash our hands in your sink please” ;) so yes, even they found it messy.

Bottom Line: I liked the idea of this Klik Ice Cream pack better than the “execution” of the product. Aside from the bite size ice cream snacks being messy to eat out of a bag I didn’t think the ice cream itself was all that enjoyable and I found the chocolate coating to be gritty and chalky. That said, the 8 and 6 year old girls that tasted it didn’t seem to agree with me on that because they described it as yummy (and messy).

Disclaimer: All items were purchased by me. No one is paying me for this review. All opinions are my own.
Posted by Isreview at 2:09 PM