Strauss Milky has a new gimmick on the market. It’s their whip cream paired with two milk-chocolate spoons.

You may remember that last spring I wrote about their whipped cream but that time it was sold with a top container of chocolate syrup to pour over the whip cream. This time the chocolate syrup was replaced with milk-chocolate spoons. 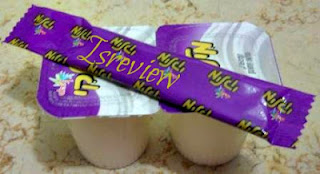 I did how ever have a different issue; my box only had one spoon in it. The spoon was individually wrapped and placed in a compartment above the containers of whip cream. (This product is sold in pairs of two; two whip cream containers and two spoons packaged together in a cardboard wrapper.) I got two whip creams but only one spoon. It could be someone removed the spoon because it’s possible to open the compartment and remove the spoons without damaging or ripping the packaging, it was not taped or glued closed. I didn’t think to check that it actually had two spoons before I bought it, but if you are going to buy this I suggest you check.

I called Strauss and complained. I was not very impressed with the customer service rep I talked to. She obviously blamed it on the store and not on Strauss. I think Strauss is to blame for the way they packaged it. She offered to send me a voucher to buy a new one but only from Shufersal, I bought this one at Rami Levi, she only had Shufersal vouchers. I don’t think that’s fair they should be useable wherever Strauss products are sold, but that was not an option. I asked if the voucher will cover replacing this product and she said yes. I'll wait and see what she actually sends. **

Taste wise the whip cream was exactly what I thought it would be. Maybe it was a drop richer and fluffier than the whip cream they put on all their other milky products but it wasn’t extra special or noteworthy in any way, it was whip cream, and yes it left a slight waxy taste in my mouth but I was sort of expecting that.

aside from the fact that I only receive one spoon, the one I got was broken! I couldn’t even use it to scoop the whip cream as it was intended to be used. I was a drop disappointed but I made do. Although it was messy, I used the stick of the spoon to eat the whip cream. 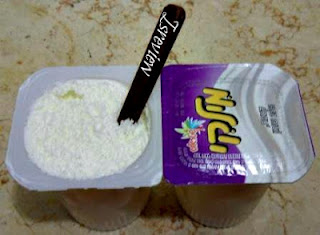 Given that the spoon is stored in the refrigerator it was quite hard, I needed to really bite into it to taste it. Then again it did not melt in my hand so that’s a good thing. Unless I bite off a chunk of the spoon and eat it with the whip cream I didn’t taste the chocolate as I used it as a spoon, maybe had I left the spoon out of the refrigerator for a while it may have softened a bit and made a difference as I used it as a spoon. If I ever buy this again I may try that but since I only had one spoon I thought of that ides too late.

I wasn’t anticipating it to be a high quality chocolate and it wasn’t but it was a perfectly fine mediocre quality milk-chocolate.

Bottom Line: I could see kids really enjoying this gimmick; Milky's Whip Cream with Milk-Chocolate Spoons. It tasted exactly the way I anticipated it to taste, just fine. I think it was fun and I think kids will get a kick out of it but even if I had gotten what I was supposed to get; two (unbroken) milk-chocolate spoons and two whip creams, I don’t think it was worth the price.

If you don’t want to bother getting a chocolate mold for spoons (I've seen them sold here at craft stores, cooking stores and some paper good stores) and making your own chocolate spoons, I’ve also seen ready-made chocolate spoons sold in some mini-markets and specialty stores. I don’t know how much they cost and what they taste like, but I have a feeling it will would work out cheaper to buy those chocolate spoons plus a full container of whip cream, I think you'll get much more for your money that way.

** Update: As promised Strauss sent me Shufersal vouchers. I got two 10NIS vouchers from them but I decided to use them for something else and I did not buy more of these Whip Cream and Chocolate Spoons with the vouchers. I just wanted to be sure I added here that Strauss did keep their word and more than reimbursed me for the missing spoon in the package I had bought at Rami Levi.
Disclaimer: All items were purchased by me. No one is paying me for this review. All opinions are my own.
Posted by Isreview at 4:48 PM