Orbit’s latest sugar free chewing gums to hit the local market are a line they are calling White with Micro Crystals. Somehow I don’t think this is all that new and I kind of think Wrigley’s have had a “White” line like this for a while. Maybe these micro crystals are new or maybe it’s an “improved line”? I’m not 100% sure. I tried to find out via Google but the more I searched the more confused I got about what was new and what just improved or renamed. In any event the three flavors of this “new” White with Micro Crystals gum are Fruit, Mint and Spearmint.


I was going to try one of the mint flavors, I’ve mentioned on other occasions that I’m not a fan of sweet fruit gums but I do like sour fruit flavored gums, then when I looked at the box of the fruit gum it had a picture of a lemon, pear and orange. That made me think it may be citrusy and more tart than sweet/fruity, so I decided to give it a try and I bought the fruit flavored one. As soon as I popped the gum in my mouth I kinda regretted my decision. It was sweeter and fruitier than I thought it would be. I didn’t taste the orange or lemon as much as I had hoped. The sweeter pear was the dominating flavor for me. As I got to the end of the flavor I did pick up on the drop of mint it had in it. All in all it wasn’t as awful to me as other sweet fruit gums are but it was in no way the more sour or citrus taste I was hoping it would be. 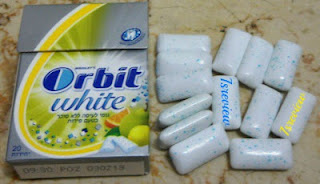 As far as how long the flavor lasted, not very long at all. No, this is not marketed as a long lasting gum. After some 5-7 minutes almost all the flavor was gone.

The gum was a bit on the “grainy” side. I think I could actually feel the Micro Crystals from time to time, even after I had chewed the gum for a while and candy coating was all dissolved.

Wrigley’s claim is that the micro crystals in this gum are an advanced formula that are intended to help whiten your teeth as you chew the gum, especially after drinking things like coffee that are known to stain teeth. The press release said that this formula is approved by the FDI-World Dental Federation.

Wrigley’s wrote that if you were to regularly chew this gum after every meal or coffee it will help keep your teeth healthier and whiter. I have no idea if that’s true or not and I have no way to really test it. If a gum or toothpaste is just as good and safe as anything else I would have used and it claims to help keep my teeth white why not, I’m all for that. But in all fairness I think these whitening micro crystals in the gum are most likely just a gimmick so I personally will only judge this gum on its taste and how long lasting it is or isn’t.

Bottom Line: I don’t know if this Wrigley’s Orbit White with Micro Crystals gum has any of the whitening benefits that Orbit says it has but if it does, ok great. Still if you are really looking to whiten your teeth I don’t think this is the way to go. As far as taste I found the orange and lemon picture on the box to be slightly deceiving because it made me think it would be a more citrus/tart flavored gum than it was. For those of you who like fruit flavored gums with a touch of mint this should be right up your ally. Just know it’s not a long-lasting gum; 5-7 minutes tops.

Disclaimer: All items were purchased by me. No one is paying me for this review. All opinions are my own.
Posted by Isreview at 1:26 PM