Just in time for Shavuot I tried a new yogurt based spread from Achla’s “Tastes of the Shuk/Market” line.

Last month I told you about the Zucchini Squash & Techina Salad from this line. Since the Greek yogurt spreads is something new for Achla it really intrigued me to try them. 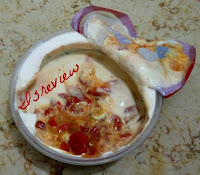 When I looked at the spread the peppers part looked similar to a Matbucha type salad so I was anticipating it to be a little bit on the spicy side but in fact it was quite sweet. It did have some ground black pepper in the mix but the sweet red peppers gave the main flavor.

Not only did the red peppers give the Greek yogurt a pretty red tint, I thought the taste of the sweet red pepper worked very well with the ever so slightly sour Greek yogurt it was mixed with.

The roasted peppers were nicely grilled but they still had a minor crunch to them, I thought that added a nice texture to the spread.

Bottom Line: Since I had never tasted a spread like this Achla Roasted Peppers & Greek Yogurt spread I had no idea what to expect from it, all in all I was pleasantly surprised how well the sweet pepper salad and sour Greek yogurt flavors worked together. I enjoyed this spread on crackers and toasted bread. I think it would make a nice addition to any Shavuot dairy meal. Granted a homemade version would be even more enjoyable but of the many Achla salads and spreads I have tasted over the years this one seemed a bit less mass produced than most of their products taste to me.

The coupon I told you about on the Zucchini Squash & Techina Salad post should be good for the yogurt based spreads too because they are also part of the “Tastes of the Shuk/Market” line so here is the coupon again.

You get 3 NIS off any one salad or spread from the
“Tastes of the Shuk/Market” line .
It expires 31-7-12
It can be used at all major supermarkets excluding
Mega Bool, Shefa Shook, Yeah and AM:PM