With Purim fast approaching Klik made sure to add a few new special treats to their ever expanding line of chocolate-covered snack packs.

Here's part of the ad that's running on TV showing the Klik's white chocolate-covered cereal snack "dressed up" for Purim.

This limited edition gives us 3 new temporary flavors; Orange, Lemon (yellow) and Bubblegum (pink). The round cereal is coated with a white-chocolate, that has one of the 3 flavors mixed in.
I tasted the orange and bubblegum ones.

The orange flavor was not overpowering it was just a slight hint of orange combined with white-chocolate. The taste reminded me of an orange creamsicle.
The bubblegum chocolate snack is a marbleized pink and white color, I'm not sure if the marble effect was done on purpose or if maybe it just didn't come together as smoothly as the orange .

When I opened the bag the first thing to hit me was the sweet bubblegum aroma. The chocolate had a definite bubblegum flavor but again it was not overwhelming. 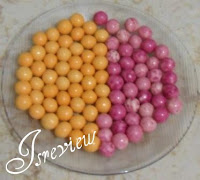 Aside from the touch of orange or bubblegum flavor and soft orange or pink color, in every other way they were exactly like Klik's white chocolate covered, round puffed cereal snack.
I personally did not care that much for either one of these treats. I got mixed reviews from the kids I offered them to, the 8, 4 and 3 year old girls, were thrilled and excited. They naturally gravitated toward the bubblegum chocolates. Not that it surprised me considering the fun pink color and definite bubblegum aroma.They liked the orange one as-well but they definitely preferred the bubblegum flavor. Whereas the 5 Year-old girl did not like the orange one at all and after one taste asked if she can exchange them for the pink bubblegum ones, which she really enjoyed.

Both are made with real white chocolate but, I tasted the artificial flavors Klik added in. That didn’t seem to bother the girls at all.

Maybe Kilk would sell more of these "dressed up" chocolates if the bags were clear and the kids could see the fun colors through the package but instead ,Kilk opted for yellow, orange or pink mask decorated bags

Bottom Line: I think the children, these Klik's chocolates are geared toward, will be delighted to see them in their Mishloach Manot packages this Purim.
Kosher: Milk Badatz

I also noticed what I think is a new "party mix" package of Kliks. Its a combination of  4 of the classic and much loved chocolate coated snacks they sell. This can be a great option for anyone who wants a little taste of each.
I do not think it’s a limited edition but rather one that will stick around.


Disclaimer: All items were purchased by me. No one is paying me for this review. All opinions are my own.
Posted by Isreview at 2:36 PM