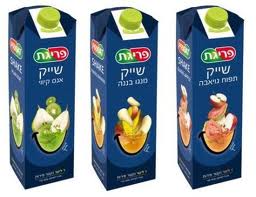 When I read the word "Shake" on the container I was expecting a heavy thick drink, closer to a milk-shake texture or a smoothie, that’s what comes to mind when I think of a shake;
Shaken beverage: a beverage made without milk or ice cream but blended or shaken like a milk-shake *a fruit or yogurt shake*
Turns out this "Prigat's Shake" is just a nectar, a thinner fruit-drink than a shake. I guess adding a few new nectar flavors is not as exciting to Prigat as starting a line of "Shakes".
There are 3 Prigat Shakes available; Pear-Kiwi, Mango-Banana and Apple-Guava
I tasted the Pear-Kiwi and the Mango-Banana Shakes

Pear-Kiwi Shake
In my opinion the pear and kiwi flavors worked well together, they sort of complemented each other. Pear was the main flavor but I also clearly tasted the kiwi.
I found the shake refreshing but I thought the drink was a little too sweet. They could have easily used less sugar, given that pear and apple (there is also apple concentrate in this shake) are sweet fruits to start with.
What I didn’t love about this shake is the kiwi-seeds floating around, and at the end, remaining at the bottom of the glass. Had it been a thicker shake I don’t think the kiwi-seeds would have bothered me but, with this thinner nectar, I didn’t like it.
Mango-Banana Shake
This time the Mango was the main flavor and the banana was secondary. The Mango-Banana shake was thicker than the pear-kiwi but still not as thick as a smoothie/shake, it’s also a nectar. By nature, mangoes and bananas create a thicker juice. It was a pleasant drink not too sweet or tangy yet nothing very special or extraordinary.

I'm not sure why they are calling it Mango-Banana when it has more mandarin concentrate in it than the mango and banana put together. The container clearly states that there is 40% real fruit in these shakes. If I do the math and there is 7% mango and 5.5% banana that is only 12.5%, which means 27.5% of the fruits in this drink are mandarin concentrate and some apricot puree. Maybe Mandarin-Mango-Banana-Apricot Shake was just too complicated of a name.
On second look I see that about half of the fruit in the Pear-Kiwi shake is pear and kiwi but it also has apple concentrate in it. At least in that case the pear and kiwi are still the majority of the 40% fruit in the shake.
Bottom Line: I thought the Prigat Shakes were fine, nothing amazing but not a failure. I could, however, do without so many kiwi-seeds in my cup. As a whole I wasn’t impressed enough to permanently add Prigat's Shake to my shopping list. Oh, and can we please "call a spade a spade" it's a nectar not a shake.
1 liter container – 3.99 NIS
Kosher: Badatz

Disclaimer: All items were purchased by me.  No one is paying me for this review. All opinions are my own.
Posted by Isreview at 2:40 PM