As a result of this past summer's "cottage cheese boycott" some changes have been made to make it easier and cheaper to import dairy products from other countries. The idea being if there are more options in the refrigerator that means more competition and therefore local dairies will have to lower their prices. In the end we the consumer benefit from having another option to choose from and hopefully fairer prices. One such new imported yogurt is from a Greek company called Kolios. It's being imported via Villi Foods for Shufersal.

The Shufersal I was in had a few 3% fat fruit flavored yogurts; wild berries, strawberry and peach. They also had a plain Greek yogurt in 10%, 3% and 0.5% fat as well as a 3% plain Greek yogurt with a "cup" of honey on the side, to add in after you open the container.


I chose to try the one with the honey add in. They named it Today Greek Yogurt with Honey. 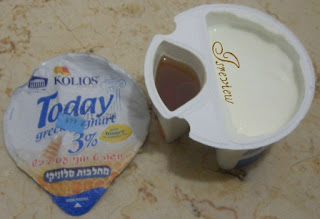 This Greek yogurt is a very thick, rich and creamy yogurt. It's slightly more sour than most yogurts I usually choose, but as soon as I added the honey it totally balanced out the flavors and added a nice sweet touch to the yogurt without being too strong of a honey flavor. I really liked that.


The issue I did have with the honey was that when you keep honey in the refrigerator it becomes thick and gooey. It doesn't flow into the yogurt the way honey should but if I put some honey on my spoon and then eat the yogurt with the "honeyed" spoon it added the flavor and sweetness I was looking for without making globs of honey drop into the yogurt and just sit there as a blob not mixing the flavors they way it was intended to.

I really liked that the honey was in a separate cup but I didn’t end up eating most of it. The majority of the honey remained in the container and it was kind of a waste. I guess whenever I buy this particular yogurt I should get one plain yogurt with it so I can eat the honey with more than one portion of yogurt.


Bottom Line: I really enjoyed Kolios's rich creamy Greek yogurt with honey. I don’t know if it's better, worse or the same as the Greek yogurt with honey that Danone Strauss sells but I am absolutely sure that having the Kolios Greek Yogurts on the shelf will help keep Strauss prices in check and that in itself is a very good thing. Since I liked this 3% Greek yogurt with honey I plan on trying the 0.5% yogurt as well as the fruit flavored yogurts they offer. If and when I do I may add an update to this post.
150 grams container 120 grams yogurt +30 grams honey–3.99 NIS
the container said 4.49 NIS on it but it rang up as 3.99 NIS


Disclaimer: All items were purchased by me. No one is paying me for this review. All opinions are my own.
Posted by Isreview at 9:58 AM