About two months ago I read a press release about two new sugar-free Kapulsky cakes, one Cheese Cake and one Chocolate Cake. As far and wide as I looked for them I could not find them anywhere. Mega carries Kapulsky's other refrigerated cake but every time I checked Mega and Mega Bool, in more than one city, I couldn't find the sugar-free ones I had read about. Even if I didn’t have this blog I would have been really curious to taste them. I mentioned in my review of Kapulsky cookies that I have very fond memories of the old Kapulsky restaurant and after the disappointment I felt when I reviewed their cookies, I sort of want to redeem the Kapulsky name in my mind, for old time sake. 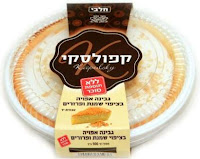 A few days ago when I was at Mega Bool I decided to jot down the customer service number, from the back of a different Kapulsky cake, and I gave them a call to find out where I can actually find the sugar-free cakes I was looking for. The next day they called me back and said the Mega Bool I was at should carry them. If I can't find it I should ask them to order it for me. That's exactly what I did. As I was standing there the manger of the department called the distributor and I was told they would have the cakes in two days time. Lo and behold two days later they were sitting in the refrigerator section of Mega Bool as promised. I took one of each and thanked the manger, whom I saw as I was walking to the checkout counter.


All that to say… I don’t usually review things that have been on the store shelves for over two months. I think by then most people who are interested in the product would have tried it and formed their own opinion. Given that I had such a hard time finding these cakes I'm assuming others did too, so I guess they haven’t really been in the stores for two months. Maybe I can still consider it a new product? 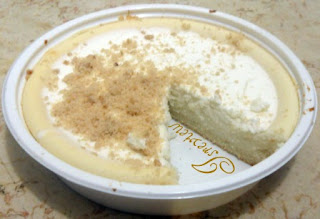 I was really curious to taste the sugar-free cheese cake. A while ago a friend sent me one of those questions that were going around twitter or facebook, she asked: "What food did you hate as a child that you now crave?" At that moment I couldn’t think of anything but when I gave it some more thought I think I could put cheese cake in that category. Maybe hate is too strong of a word but I really did not enjoy cheese cake when I was younger. Now from time to time I absolutely crave a good cheese cake, so that was the first one of these Kapulsky sugar free cakes that I tried.


The cheese cake has a pie-like base that's filled with a softer cheese cake filling and a top layer of sour cream that is then sprinkled with some crumbs. I say "some" but really mean a few; they were very stingy with the amount of crumbs they sprinkled on the top.

Every part of the cake had a powdery/grainy taste and texture but it was most prevalent in the cheese filling. I really do not like grainy or chalky cakes and cookies so this absolutely bothered me and disappointed me.If not for the graininess I think I would have really enjoyed the cake. It was light, fluffy and not too sweet. I liked the contrasting sour flavor that the sour cream added. I didn't even taste an annoying artificial sweetener aftertaste. But the powdery grainy texture is not something I can get past and therefore this is not a cake I will be repurchasing.

On to the Sugar-Free Chocolate Cake


What I liked about the chocolate cake was that it's not overly dense or too rich but still it's dense enough with a nice amount of fluffiness. That’s exactly the way I like a chocolate cake to be.


Sadly it didn’t end there. What really bothered me about this cake was the artificial sweetener aftertaste. I know I often pick up on such aftertastes when it really doesn’t bother others, so when my neighbor stopped by I gave her a slice of this chocolate cake with a cup of Lipton's Jasmine Green tea (which by the way she really liked and she is not a huge fan of green teas) to see if it's just me or if the artificial aftertaste bothers others too. 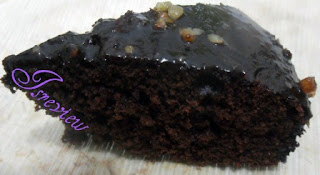 She enjoyed the cake and liked how moist it was without being overly rich. At first she didn’t really notice the artificial sweetener taste. Once she did pick up on it she didn’t love it but said it didn't bother her all that much in the cake itself. In the icing she thought it was much stronger and there it did bother her.


The one thing about the icing that she did like was the crushed nuts on top of the icing. I agree with her that the aftertaste is much stronger in the icing but I didn't like the crushed nuts at all and would have been happier without them.


We both thought the icing was too watery and thin. We would've preferred a richer or thicker icing for this specific cake.

Bottom Line: I don’t think these sugar-free Kapulsky cakes were worth the wait but I am glad I tasted them. The cheese cake was way too grainy and chalky and I have no intention of buying it again. There are way better sugar-free cheese cakes available at different local bakeries for a similar price.


Regarding the chocolate cake if I could get past the artificial sweetener aftertaste this may have been a winner but as is I just did not enjoy it enough to repurchase it. My friend on the other hand, said she may buy it from time to time and add her own icing to replace the one she didn’t like.

Disclaimer: All items were purchased by me. No one is paying me for this review. All opinions are my own.
Posted by Isreview at 12:05 PM