Hotpop's attempt at joining the "sweet & salty" trend led them to this special "summer edition" of Sweet & Salty Flavored Popcorn.

It's always more fun for me to try new products together with my friend, and it also gives me the opportunity to give you more than one opinion in the blog post. So I was really happy when my friend agreed to try this popcorn together with me and allow me to report on her opinions as well, so here goes. 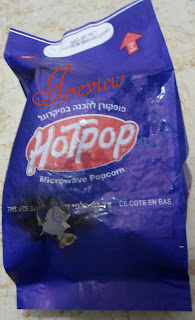 Both our microwaves have a special "popcorn button" so we each put a bag in our microwave and used the preset button to pop the popcorn. The bag said it needs anywhere between 2 and 4 minutes on a high setting, my microwave's "popcorn button" is actually 2 minutes and 30 seconds but on my friend's microwave it was 2 minutes and 10 seconds. As it turned out, those 20 seconds made a huge difference, because when I took my bag out of the oven it had a small hole burnt through and through, but only a few kernels were burnt, most of the popcorn was perfectly fine. On the other hand my friend's bag didn't burn what so ever and only had a small amount of unpopped kernels, which is what you'd expected from almost all microwave popcorns.
Our first reaction was "I don't think I've ever had this combination of flavors... It's interesting".
My friend thought it was interesting in a good way; I on the other hand, didn’t really mean it in a good way. I really didn’t like what I thought was an artificial sweet taste that seemed to overpower the popcorn in my opinion. My friend didn't agree with me about the artificial sweetness but we did agree that it seemed more sweet than salty.


We both thought that for the first few second after you put this popcorn in your mouth you think it's gonna be "caramel popcorn" but fairly quickly you realize it's just not… and a whole different taste takes over. I like how my friend put it, she said "it's confusing in my mouth" I totally agreed with that!


I thought the popcorn was more sweet than salty; my friend summed it up perfectly saying "The contrasting flavors were not balanced, the sweet overpowers the salty at first bite, but then a combo of sweet & salty kinda lingers on tongue." We agreed that the popcorn really needed a little more salt to help balance it out. I decided to try it combined with salty chips. That seemed to be a big improvement. I think if I wasn’t so sensitive to the artificial sweetness, I kept tasting, mixed with other salty snacks, this popcorn might have been a winner for me. 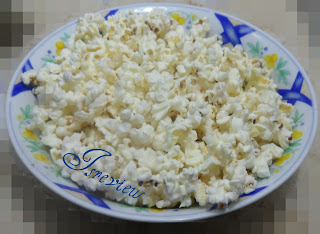 We had a really difficult time pin pointing what it reminded us of, or what we can compare it to. My friend said it best saying "it sort of can be compared to those "party mixes" that have say popcorn, pretzels and some candy stuff in it too and your meant to enjoy the whole mix together." I would say that's what I think Hotpop was going for with this popcorn.
One major issue we both had with this popcorn was how oily it was. That could be because normally neither of us buys anything but low fat microwave popcorn, so it's possible we're just not used to how much oil is added to regular microwave popcorn, but while eating this sweet & salty popcorn the greasiness really bothered us.
Regarding the children's opinion, the 6 year old didn’t enjoy the popcorn and said she much prefers salty popcorn but the 3 year old really really liked this popcorn and said "this popcorn tastes sweet. I like it" and she kept asking for more.


Bottom Line: Hotpop's Sweet & Salty Popcorn seemed to get mixed reviews. The more I ate it the more I disliked it. My friend on the other hand, said the opposite, the more she ate it the more it "grew on her". My friend's conclusion was that "this popcorn definitely awakens different senses on your tongue that you don't usually focus on at the same time, I don't hate it but it's not going to become my new favorite ". (I should add that a little while later we were both feeling fairly nauseous but my friend thought it was mainly because of how oily this popcorn was. For me I thought it was partly the artificial sweetener but largely she was right, it was the oil.)


Disclaimer: All items were purchased by me. No one is paying me for this review. All opinions are my own.
Posted by Isreview at 2:54 PM