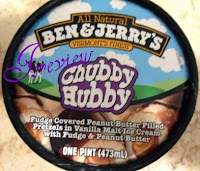 A few months ago I got an email from Ben and Jerry's Israel informing me that as a "member of their fan club" I can vote to help them decide what their new flavor for 2011 should be.
The flavor that stood out to me was Chubby Hubby. The name itself, although it's catchy and cute seemed odd for an ice-cream flavor. I don’t really want to be thinking of "chubby" as I scoop out another serving of ice-cream, power of association and all!
That having been said when I read the description:  Fudge-Covered Peanut Butter-Filled Pretzels in Vanilla Malt Ice Cream Rippled with Fudge & Peanut Butter, I was intrigued. Chubby Hubby got my vote! The combination of sweet and salty with a little crunch really sounded exciting to me.
I was pleasantly surprised to find out that the large majority of voters agreed with me. I didn’t think Israelis had the same appreciation for peanut butter as most Americans I know.  (pre all the peanut allergy restrictions in school in the USA these days) I guess I was wrong because low and behold Chubby Hubby won in a landslide victory and became the new flavor for 2011!
Chubby Hubby turned out to be a really great flavor. I was skeptical as to whether so many tasty ingredients would work well together, I wasn’t sure they could pull off the combo. Obviously, they did and it was a treat for my taste buds.
There was an extremely generous amount of fudge, peanut butter and pretzels in the container. I'm often disappointed in how stingy they can be with the "extras". I recently bought a pint of their Chocolate Chip Cookie Dough ice-cream and there was hardly any cookie dough to be found in it, I hate that. I have to give them credit this pint was full of all the "extras" and wow, they all worked together so well.

There was one disappointment: the pretzel, although it was thickly coated in chocolate fudge, lost its crunch and felt soggy to me. I had really been looking forward to the crunch factor but it was not there. I'm not sure how I expected it to stay crunchy but I hoped they had a secret, turns out they don’t!
According to the Ben and Jerry's web page http://www.benjerry.co.il/hebrew/default.aspx
Chubby Hubby started as a joke, 2 workers who were sick and tired of their coworker constantly telling them how much he loves Ben and Jerry's Ice-cream told him that there was a new flavor. They described Chubby Hubby to him. He searched high and low to find the ice-cream until they finally told him it was a joke. He was so disappointed that they decided to make him a pint of this flavor at home. After tasting it they all decided it was a winner and really had to be made. I guess the powers that be at Ben and Jerry's agreed because it is no longer a joke but a new flavor now available here in Israel as well.
Bottom Line- although I hoped the pretzel would be crunchy, it wasn’t ,as a whole Chubby Hubby  is a fun & exciting ice-cream full of interesting flavors that really work well together.