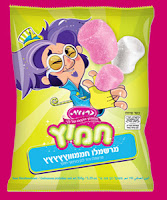 Carmit recently developed a line of sour candies including marshmallows, taffies, lolly-pops, and gummy bears.
I wonder if their decision to put them on the self now, Purim time, was simply because they are new candy for Mishloach Manot or maybe because of the ונהפוך הוא ( "VeNahafoch Hu" ) aspect to them. You don’t expect a marshmallow to be sour. Then again I may be reading way too deep into when a company decides to débuted a product and maybe it has nothing to do with things getting turned around and upside down in the story of Purim. Most likely its simply that sour sweets is a huge craze in general at the moment. 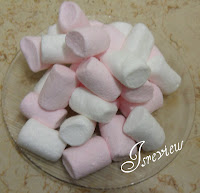 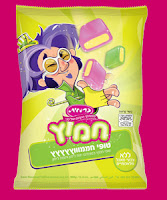 Sour Taffies
Although I don't think sour taffies are all that new, in that, I'm sure other companies make sour taffies, they are new for Carmit.
The sour taffies package was a mix of 2 flavors, strawberry-lemon and apple-lemon. The apple-lemon seemed slightly more sour to me but they were both somewhat sweet and somewhat sour with neither taste overpowering the other. In that way they reminded me, to some degree, of Jelly-Belly sour jelly beans. In every other way, shape, texture and packaging they look and feel like a regular, individually wrapped, taffy candy. The strawberry one is pink with a yellow center and the apple one is green with a yellow center.

I'd say they are exactly what they claim to be: a sour taffy. I liked them because usually taffies are too sweet for me.
An 8 and a 4 year old girl who tasted them said they would prefer a sweet taffy. Still, a 5 year old who enjoys sour-belts, and the like, really loved the sour taffies and she was so excited that it had two different colors in one taffy. Carmit's sour taffy was a "win win" for her.
Bottom Line: They seem to totally live up to their name. I think they are a successful sour taffy.

Disclaimer: All items were purchased by me. No one is paying me for this review. All opinions are my own.
Posted by Isreview at 3:01 PM