Ever since Maimon products hit our local store shelves, and won a 2010-2011 Product of the Year Award, I've wanted to taste and review something of theirs. Being a really big fan of both pancakes and waffles I finally have an opportunity to write reviews about two Maimon products that absolutely interest me.


Today I'll review the Readymade Belgian Waffles and later in the week I hope to post a review on the pancake mix.


The waffles come in a plastic wrapper with 12 mini waffles per packages. Each
waffle is a 3 inch by 2 inch rectangle.

First I tasted the waffles as is; without warming them up in the toaster oven, I just dipped them in a bit of maple syrup. I didn’t think it tasted like a Belgian waffle. Instead I thought it was more like a slightly sweet sponge cake. 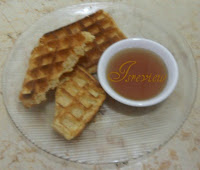 I then toasted the waffles and hoped that would make them taste more like what I'd anticipated them to be. Again they didn’t remind me of what I know as a fresh Belgian waffle. It wasn't even close to what I consider the fresh version's less tasty "counterpart" the readymade frozen Belgian waffle. What it did taste like to me was more of a crispy yet "softish" "cakelike" cookie/wafer.


In my mind waffles are a "breakfast food" and not a dessert but these waffles seem to be more like a sweet dessert. I happened to have a one scoop container of Ben & Jerry's vanilla ice cream in the freezer and I decided this would be the perfect opportunity to enjoy it. I made myself a little ice cream sandwich, poured some maple syrup over it, and had a little party :) 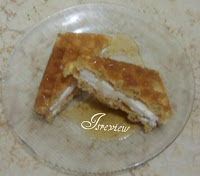 Bottom Line: I didn’t dislike these Maimon's Readymade Belgian Waffles but I don't think they're Belgian Waffles. Toasted, I'd say they make an OK "cookie" for an ice cream sandwich. So just know you're not actually getting a breakfast waffle but more of what I would call a readymade "dessert cake base" type product to "embellish".

I recently came across a post in the blogosphere for a French Toasted Angel Food Cake, it made me think that maybe I should try "French toasting" these waffles just for the fun of:)


Disclaimer: All items were purchased by me. No one is paying me for this review. All opinions are my own.
Posted by Isreview at 1:53 PM