If I understood the press release correctly, a few months ago Magnum Strauss released an ice cream bar they called Triple. Then not too long ago, they added two more Magnum bars to the Summer 2013 line; one is called Black and the second Pink.

Magnum Black Espresso is a Vanilla Ice Cream with a coffee swirl coated in dark chocolate.


Magnum Pink Wild Berry is a wild berry ice cream with a raspberry swirl and 2 coatings; one is white chocolate and the second is a pink colored chocolate.

The other day I did have the opportunity to try the Black Espresso Magnum and here is what I thought of it. 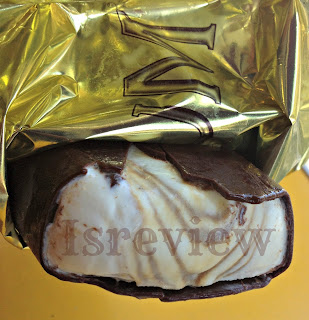 The Dark Chocolate coating was the perfect thickness and texture; it cracked off easily when I bit into it but they were not stingy with the thickness of the dark chocolate. You may know by now that I love dark chocolate, although this was not the world’s greatest dark chocolate it was rich enough and I enjoyed it as an ice cream coating.

The vanilla ice cream part was just OK. I know many people rave about Magnum’s ice creams but for me I would prefer if it was a drop creamier. I personally like Ben & Jerry’s ice cream texture better. I find it heavier and creamier but this vanilla Magnum ice cream was fine.

I could see the coffee swirl but I didn’t really taste it all that much. I found that the richness of the dark chocolate overpowered the espresso flavor and I might have missed the coffee flavor had I not seen it and known it was there.

Bottom Line: Since I really enjoy dark chocolate I liked the Magnum Black Espresso Ice Cream Bar enough but if you are looking for a coffee flavored ice cream this is not the bar for you. The dark chocolate coating overpowered the coffee flavor of the swirl. I thought the ice cream itself could have been creamier and richer but it wasn’t terrible.

Price: In my opinion it was overpriced; 12 NIS for an 87 gram ice cream bar is too much, but I bought it at a central bus station kiosk where I think highway robbery is "the name of the game" so I wasn’t shocked with the price. The fact is that I think almost all ice creams sold at kiosks are overpriced so this was no exception.

Disclaimer: All items were purchased by me. No one is paying me for this review. All opinions are my own