Pesek Zman, who won a Product of The Year Award last year for their original 2Good wafer roll, has now added a new flavor. This time it’s a white-chocolate coated 2Good wafer roll that has a nut cream filling. 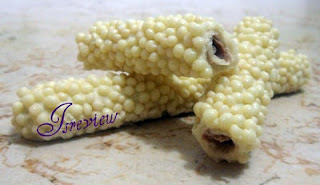 I thought the the nut cream filling and thin crisp wafer roll were good too; they remained the same as in the original 2Good treat. I'd say the flavors and textures worked just as well together in this all white bar as they did in the milk-chocolate and white-chocolate mixed one.


Even though I didn’t have both 2Good wafer rolls side by side to do a comparison I think I actually preferred this new white 2Good Pesek Zman over the original. I guess it's because I don’t usually like mixing white-chocolate and milk-chocolate in one snack so this one being all white-chocolate was preferable to me.

Disclaimer: All items were purchased by me. No one is paying me for this review. All opinions are my own.
Posted by Isreview at 3:35 PM