Yad Mordechai has a new line of honey being marketed as a "children's honey". There are 3 flavored honeys in this new line; strawberry, vanilla and wild flowers. Of the three flavors the vanilla one seemed the most interesting to me, so that’s the one I tried.


This new line of Yad Mordechai honey comes in small squeeze bottles. I know this sort of bottle is not new to the honey industry but I thought this one worked very well and didn't make a mess at all. That’s a plus in my book.


I also liked the colorful cute bee drawing on the packaging but aside from the packaging I'm not sure why they're calling this a children's line of honey? The press release claims they chose flavors that kids really like so it can use it as a heartier sweeten for children's snacks and foods. I sort of think vanilla and wild flowers are flavors that adults enjoy more than children but I may be wrong on that I don’t know. In any case I won't get too caught up in the name of the line instead I'll focus on the taste of product itself. 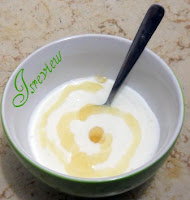 Since I enjoyed the Kolios's Today 3% Greek Yogurt with Honey I decided to taste this Yad Mordechai Vanilla Flavored Honey in a plain yogurt. I thought the honey worked very well in the yogurt and the touch of vanilla added a nice extra layer that I enjoyed. I should say the vanilla was very understated I did notice it but it wasn't "in your face" at all, I liked that.
I also tasted this honey on its own and with some Challa. As with the yogurt, in both these cases I enjoyed the honey and thought the vanilla was a welcomed extra tough. I'd say the honey itself was a lighter honey than Yad Mordechai classic honey and I enjoyed that too.

Bottom Line: I don’t think this is a children's honey/product per se. I think adults will enjoy it more than children but many kids may like it too. I liked that it’s a somewhat lighter honey and thought the vanilla flavor added a nice element to whatever I ate this honey with but at 15.79 NIS for 250 grams I think it's overpriced. On a regular basis I can't see myself paying that price for a non-organic Yad Mordechai honey, flavored or otherwise.


Update: I found a coupon for these Yad Mordechai Flavored Honeys for Kids. It’s a 50% off coupon for any of the 3 flavored honeys. It can be used at most major supermarkets except Mega Bool, Shefa Shook and Yesh.
It expires 31/7/12.


Disclaimer: All items were purchased by me. No one is paying me for this review. All opinions are my own.
Posted by Isreview at 2:22 PM