As they do for each holiday, Roladin has a few special cakes and treats for Rosh Hashanah. The one that caught my eye and intrigued me most was the Honey Caramel Sticky-Bun Brioche.


According to Roladin's website this Honey Caramel Sticky-Bun Brioche won first place in a taste test that was done, by the Israel Hayom newspaper, of all the new Rosh Hashanah cakes. I'm not sure what other bakeries and cakes they were up against but knowing it was considered the "best new Rosh Hashanah cake" gave me the extra push to try it.

This Honey Caramel Sticky-Bun Brioche turned out to be exactly what I anticipated it to be; a buttery brioche base with a honey, brown sugar and cinnamon mixture, generously poured over it, then sprinkled with a few pecans.

The brioche part was wonderful and enjoyable. It had a small amount of a cinnamon and sugar mixture "swirled" through the "layers", as you would expect in a cinnamon bun. Since the top is so abundantly sweet I was glad that the inside of the cake only had a bit of the cinnamon and sugar mixture. The cake part being fairly plain helped balance the overall sweetness of the sticky-bun. For those that prefer a less sweet cake they can cut off the top keeping only the center of the cake and still enjoy this brioche. I'll be happy to eat the top for them :) 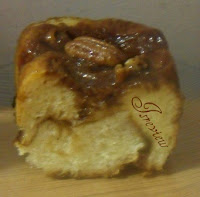 Although the honey, brown sugar and cinnamon "sticky" mixture was extremely sweet I didn’t think it was way too overly sweet. I did taste the honey but it didn’t seem to be the dominant flavor of the syrupy topping. I'd say the honey was mixed well with the brown sugar caramel. I guess this Honey Caramel Sticky-Bun Brioche can be perfect for those that don’t love traditional honey cakes but still want to partake in the unofficial "custom" of eating some sort of honey cake over the Rosh Hashanah holiday.

There were only a few pecans sprinkled on top of the cake. I don’t think there were any pecans in the rest of the brioche. So for those who don’t eat nuts on Rosh Hashanah I think it should be fairly easy to remove the few pecans and still enjoy the sticky-buns.

I liked Roladin's Honey Caramel Sticky-Bun Brioche. I think it would make the perfect indulgent and sweet "breakfast treat" for Rosh Hashanah morning. Although it lived up to my "sticky-bun" expectations I'm not sure it's an award winning cake. Then again I didn’t taste all the other cakes it was up against in the Israel Hayom "competition" so it may have deserved the first place in their taste test after all.