For starters the wrapper claims to be “re-closeable”, just like the Milka chocolate bars are, but both Elite Para Aerated Chocolate Bars I opened ripped in a way that prevented me from being able to re-close them properly. I never had that issue with Milka’s re-closeable chocolate wrappers. So even if the adhesive on this Elite wrapper would have been good enough to re-close the wrapper it was torn in a way that I could not even try it, making Elite’s re-closeable wrapper a fail in my book.


First I tasted the Milk-Chocolate with Caramel filling. In a way the bubbles in the Aerated Chocolate Bars helped curb the “chalkiness” I normally feel in Elite Para milk-chocolate bars but disappointingly the caramel filling was so chalky that it didn’t help that the bar itself didn’t feel as grainy as other Para Chocolate bars do because in the end I still ended up with the chalky texture. Another thing that bothered me about this milk-chocolate bar was it left a slight shorting-like film in my mouth that I really didn’t enjoy. 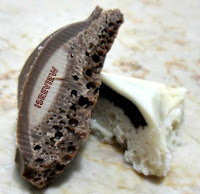 I enjoyed the the White-Chocolate with Truffle Cream filling somewhat more than the Milk-Chocolate with Caramel filling because it didn’t leave as much of a shorting-like film in my mouth and the filling was less chalky but it tasted very much like all of Elites White-Chocolates, which I am not a huge fan of to start with, so although it wasn’t awful it wasn’t a huge winner for me either. If you like Elite’s white-chocolate I think you may enjoy this bar. The truffle filling is rich, chocolaty and present but still lets the white-chocolate flavor be the star.

Bottom Line: As a whole I like the texture of aerated chocolate bars. Even though the” bubbles” did help curb the chalkiness I usually taste in Para chocolate bars I still think these Elite Para Aerated Chocolate Bars were fairly poor quality. Still I thought the white-chocolate bar was better than the milk-chocolate with caramel filling. The idea of adding cream filling to an aerated chocolate bar is a nice idea in my opinion but still I think Elite failed when it came to the quality of the chocolate, the filling and the packaging. They were not the worst chocolate bars I’ve ever tasted but I’d say they have a lot of improving to do for me to buy them again.

Disclaimer: All items were purchased by me. No one is paying me for this review. All opinions are my own.
Posted by Isreview at 12:55 PM

Email ThisBlogThis!Share to TwitterShare to FacebookShare to Pinterest
Labels: chocolate