I tasted two of the four Osem Crispy Snacks a few weeks ago and wasn’t going to post a review of them because I wasn’t all that impressed with them and didn’t have much to say about this product. Then the other day I had friends over so I asked them if they would like to taste these cracker/snacks. They all said yes, as it turned out my friends really liked these Osem Crispy Snacks. So I thought it may be worth posting a review after all.


The interesting thing is that all the Hebrew reviews I read about these Osem Crispy Snacks, and I read quite a few of them, all said they absolutely loved both the Sour Cream ‘n Onion and the Mini Breadsticks. In each review one of those two options stood out as the reviewers’ favorite of the bunch. But then again they seemed to really like all of them very much and I wasn’t so impressed with the two I tried so I am not rushing out to try the other two.

Yes I agree it’s nice to have more baked, not fried, salty snacks to nibble on or to use as a cracker with dip, but I personally prefer the Bagel Bagel “Neshnushim” line which seems to be what Osem was tiring to copy here. 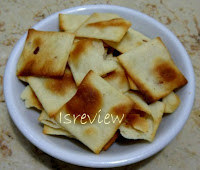 The Crispy Chips Snack; which is sort-of a puffed potato snack, was not really that tasty in my opinion. I didn’t enjoy the strong potato taste it had. The first time I tasted it I didn’t think it was salty enough but maybe that was because I was comparing it to the Bagel Bagel one that I prefer. I had the same issue with the Crispy Corn Snack, at first I didn’t think it was salty enough but the second time I snacked on it I thought it was OK visa-ve salt, but I still didn’t really like it. The corn flavor was to “drying” and very overpowering in my opinion and I didn’t like the texture of the cracker. All in all it just didn’t work for me. 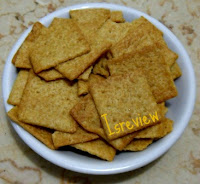 As I said my friends totally disagreed with me, granted they never tasted the Bagel Bagel ones I mentioned earlier, but they thought the strong potato and more dominate corn flavor respectively, in these Osem Crispy Snacks, were interesting and enjoyable. They said they liked that it was something new and different for them to nibble on as they watched the game.

They really liked that these Osem Crispy Snacks were baked, not fried. Most of my friends thought these cracker/snacks were salty enough for their likening. The one thing that was mentioned more than once was that the snacks were a little dry and they needed to drink more than if they were nibbling on say sunflower seeds or pretzels, but that didn’t seem to bother them all that much.

Bottom Line: All the Osem Crispy Snack bowls were empty by the time my friends left that night. I’m glad they enjoyed them but since I didn’t like them I do not plan on buying any of these Osem Crispy Snacks in the future.

Disclaimer: All items were purchased by me. No one is paying me for this review.
Posted by Isreview at 6:31 PM