Tnuva has added new flavored cottage cheeses to the local market. This time they went the "savory" route, one has Darkened Olives and the other has the spice called Za’atar added to it. I am not 100% sure if the Green Olive option is new or not. I had never noticed/tasted it but, I’ve not been buying Tnuva cottage cheese since before last year’s boycott, so I do know for sure if the green olive one is new or not. The press release I read did not mention the green olive one either so it’s possible that it has been available for some time and the new flavors are the darkened olives and za’atar flavored cottages.


I was at my friend’s house the other day and saw the za’atar flavored cottage in her refrigerator so I asked her what she thought of it. She told me that since she’s a huge za’atar fan and likes to add it to many things she eats she was interested to see how it would taste in the cottage cheese. She was not disappointed. My friend liked that there was quite a bit of the za’atar added to the cheese which gave the cottage a strong za’atar taste. 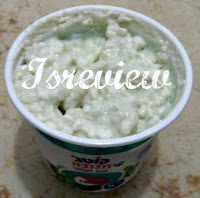 Her kids, ranging in ages from 10-5, who do enjoy a touch of za’atar on pita or labneh cheese for example, did not like the za’atar flavored cottage. They thought it was too strong and overpowering. They didn’t like how it took away for the “pure” cottage flavor that they like so much.

Even though my friend offered that I can taste it for myself, I chose not to taste it, something about the green dots added to the cottage put me off. I don’t know why it’s ok in my mind when za’atar is added to other soft white cheese but in cottage it didn’t look appetizing to me.

Bottom Line: From what my friend said if you’re a fan of za’atar and enjoy adding a good amount of the spice to many things you eat, it’s likely that you’ll enjoy this new Tnuva Cottage with Za’atar.

Disclaimer: All items were purchased by my friend. No one is paying me or her for this review.
Posted by Isreview at 5:11 PM