Both Tara Moo and Strauss Milky have a new pink colored pudding on the market. Milky’s is a strawberry flavored pudding whereas Moo’s is Banana Punch flavored. I wasn’t going to try either of them mainly because I didn’t think I would like them; I’m not a fan of fruit flavored puddings. Then I found a 2+1 coupon for the Moo puddings and decided to try the vanilla pudding**.

Since I was in the store with a six year old I asked her if she would like to try the Banana Punch Pudding, she said yes, so I got one of the Banana Punch as my “free” pudding of the three.


To me the Moo Banana Punch Pudding tasted exactly the way I was expecting it to taste; it had a fairly dominant banana flavor followed by a fruity punch taste. The only way I enjoy banana flavor is when I’m eating a fresh banana so I wasn’t surprised that I didn’t like this pudding at all. 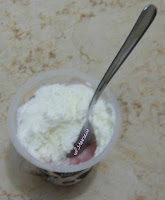 I also found that the whip cream left a very strong shortening-like film on my tongue, more so than I had remembered from the last time I ate a Moo pudding. That shortening-like film is something that really bothers me in any food that I eat, this time was no exception.

I only tasted one spoonful of the pudding and gave the rest to the six year old I mentioned earlier. When she first saw the pudding she said she loved the pretty pink color. After she ate the the pudding she told me it wasn't her favorite pudding, she didn’t hate it but next time she would rather the chocolate pudding option.

Bottom Line: I didn't think I was going to enjoy the Moo Banana Punch Pudding so I wasn’t surprised that I didn’t like it. The six year old who tasted it wasn’t crazy about it either. She didn’t think it tasted like banana punch ice cream, as Moo had mentioned in their press-release and added as a decoration on the container.
I didn’t like the whip cream but she enjoyed that part very much and was glad that there was a good amount of it in the container.

** BTW the Moo Vanilla Pudding was OK, nothing special, just fine. I would have liked it to have a bit of a fuller/stronger vanilla flavor but it didn't surprise me that it was just your run of the mill, per-packaged, blandish vanilla pudding. Somehow the whipped cream did not bother me as much in the vanilla pudding as it did in the banana punch one.

Disclaimer: All items were purchased by me. No one is paying me for this review.