As I’ve mentioned in the past yogurt is a category here; in the local Israeli market, that is constantly coming out with “new” products. I probably could write a review on a new yogurt or pudding a few times a week but frankly I don’t care to. I think it’s a little ridiculous that they take off the shelves successful products/flavors just to come up with a so-called new flavor or new product that is likely to be gone as soon as you start getting used to it and enjoying it. So instead of writing a few separate reviews I will do a roundup of three yogurts I recently tasted and tell you in short what I thought of them.


Starting with the Dannona Bio “health first” line of 1.7% fat yogurts that came out a few weeks back. The flavors it’s available in are “a touch of” Lemon, Lychee or Mandarin. Being that I tend to like tart flavors I tasted the Lemon one and was disappointed. I didn’t think it was tart enough for my liking but what really bothered me was the texture of the added lemon. It seemed to have been lemon “shavings”; as though the lemon zest was grated into the yogurt. Somehow that didn’t blend nicely, in my opinion, with the creamier texture of the yogurt itself.
150 gram container- 2.85 NIS

Another recent yogurt I tasted was part of Tnuva’s summer line. It’s a Yoplait White Refined Bio 1.5% Yogurt with a “squeeze” of fruit. It comes in apple or peach flavor. I tasted the peach one. I actually really enjoyed it and thought that the touch of peach was delicate enough to add interest to the refined white yogurt but not too overpowering. I even found a coupon for this product in case you want to try it or if you already have tasted it and know you like it.
150 gram countiners-2.85 NIS

Which brings me to the latest yogurt I tried it’s from Dannona and it’s a Bio Yogurt with Fruit at the Bottom. According to the press release people seem to prefer the fruit at the bottom so they can add the fruit as they eat the yogurt and not have it “pre-mixed” for them by the company. I personally prefer when the fruit or add-ins are in a separate compartment and not in the same container, be it on top, bottom or per-mixed. But maybe most people do not agree with me on that.

This Dannona with fruit on the bottom comes in a number of “typical” yogurt flavors including strawberry, banana pineapple, blueberries and peach with passion fruit. Some of them are 0% fat and have no added sugar and some are 3% fat and do have sugar. But the flavors that interested me most and I wanted to try were the more “original” ones like Pomegranate with Cherry or Black and Red Currants. I found the Pomegranate with Cherry one in the first store I checked so that’s the one I tasted.

At first spoonful I thought the yogurt part was too sweet but as I continued eating it I realized it wasn’t really overly sweet compared to other such yogurts on the market but I’m just used to, and prefer, eating sugar-free yogurts or goat-milk yogurts. Not to mention as a whole, at the moment, I happen to prefer the white bio “refined” Yoplait yogurts over Dannona’s yogurts so this wasn’t my favorite to start with. Still it was enjoyable enough. 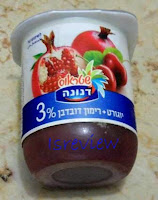 At first I tasted more cherry than pomegranate but there was enough pomegranate added in to give it a more interesting taste and add another layer of flavor. As someone who doesn’t love cherry flavored yogurts this was different enough and I found it enjoyable.

I thought there was a good fruit to yogurt ratio.

I still would have preferred having the fruit in a separate compartment but since that wasn’t an option I did like that the fruit was at the bottom as opposed to being on top or mixed in.

Bottom Line: Of the three Yogurts I tried; Dannona Bio “Health First” Lemon Flavored Yogurt, Yoplait White Yogurt with a “squeeze” of Peach and Dannona Yogurt with Pomegranate & Cherry at the Bottom,  I can see myself possibly repurchasing the Yoplait White Yogurt with a “squeeze” of Peach. I didn’t think the Dannona Yogurt with Pomegranate 'n Cherry at the Bottom was worth the, comparatively, higher price. My assumption is it will be off the shelf as soon as Rosh Hashanah is over, so if you think it’s a yogurt flavor you would enjoy I suggest you look for it before that.

Disclaimer: All items were purchased by me. No one is paying me for this review. All opinions are my own
Posted by Isreview at 3:54 PM