I actually look forward every Purim (and Chanukah) to see what new and creative flavors Roladin will come up with for their Oznei Haman (and doughnuts). They sell the "traditional flavored Oznei Haman" like poppy seeds filling (including a sugar free poppy-seed version), as well as chocolate, upping the game by using Belgian chocolate. The fun begins with the limited edition flavors created just for that year. 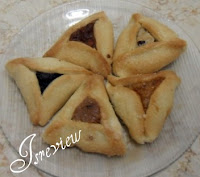 This Purim's special flavors are;
1)Chalva Cream with Belgian Chocolate Bits
2)Hazelnuts,Chocolate Bits & Peanut-Butter
3)Caramelized-Walnuts with a touch of Vanilla & Orange
4)Almond Amaretto Mix
5)Dates & Spices
I love their creativity!
The "cookie" part of Roladin's Ozen Haman is a buttery, crispy, crummy cookie. Kind of, like a thinner shortbread cookie. All 4 of the Oznei Haman I'm reviewing here are made of the same cookie. Crispy crummy cookies are not my favorite kinds of cookies.

The first Ozen Haman I had was fresh out of the oven, literally minutes after it was baked. You can't get much fresher than that!

The Chalva Cream with Belgian Chocolate Bits Ozen Haman, cookie part, was crisp and crummy, but not grainy and actually a little too buttery. I didn’t love the cookie but the chalva and chocolate bits center was warm, soft and gooey. The chocolate bits melted as I bit into it, YUM!  The chalva to chocolate ratio was perfect. Both flavors were clearly present but the chalva definitely had the lead. When I tasted it again later in the day I actually liked the cookie better, it was not as crummy, the cookie kind of "came together" but I missed the oozing goodness of the center. Not that the filling was bad, it just wasn’t as special as fresh out of the oven.

Next, I tasted the Hazelnuts, Chocolate Bits & Peanut-Butter one. You may have gathered, by my positive review of Ben & Jerry's Chubby Hubby that I like a peanut-butter chocolate combination, but I felt there was not enough chocolate in this Ozen Haman filling. The peanut-butter was slightly overpowering the other flavors.  Another thing I didn’t like was that the chopped hazelnuts were a little too hard in comparison to the softness of the peanut-butter and chocolate, the contrast bothered me a bit. If you like "crunchy peanut-butter" as opposed to the smooth one, this might be a winner for you. All in all I think this flavor is a good idea that needs a little bit of improvement.

The Caramelized-Walnut, Vanilla & Orange was OK but, it was really just a touch of vanilla and orange, so much so, that I had a hard time even tasting them. Had I not known they were there I might have missed them. The caramelized walnut was tasty but I just wish the vanilla and orange would have been a little more obvious.

I really enjoyed the texture and taste of the Almond Amaretto Mix filling. The flavors worked well together. Neither was overpowering and the amaretto was not too strong. For my friend, who had no idea which one had the liquor in it, she got it right, but it was not off the bat. I actually think that overall I liked this Ozen Haman the best out of these 4 I tasted.
Roladin's Oznei Haman are rolled, filled and folded by hand.
Bottom Line: I did not love the "shortbread" butter cookie part but it was fun tasting the unique flavors, some were better than others.

I think 4 NIS for one Ozen Haman is WAY over priced, even if they are "hand-made". I know Purim is just once a year but I don’t think I can justify spending that much money on an, average sized, Ozen Haman.
Kosher: Milky - Rabbanut Yerushalayim
1 Ozen Haman – 4 NIS
Disclaimer: All items were purchased by me.  No one is paying me for this review. All opinions are my own.
Posted by Isreview at 2:41 PM