For those who can't eat matzo for one reason or another or if you are traveling and don’t want the kids to cover the car in matzo crumbs you might want to consider trying these Kosher for Pesach Rolls.

I found Kosher for Pesach Rolls from 2 companies in the freezer department at Mega Bool Supermarket; Green Lite and Pillsbury.


Pillsbury only had one size available 4 rolls 75 grams each. The package cost 19.99 NIS
They are both to be kept in the freezer. I warmed them up in a sandwich maker/ Panini press so the crust was perfectly crisp leaving the inside soft and fluffy. 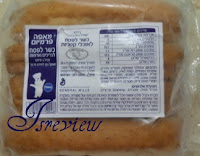 As a whole I thought both rolls were very similar in taste to each other. I didn’t do a blind taste test but I still thought they were very much alike. They both had a very slight mashed potato taste. The Pillsbury one might have a drop more of a mashed potato flavor and it may have left a few more crumbs than the Green Lite roll.

I think that most things I would eat in a sandwich would not be poorly affected by the slight mashed potato taste it may actually add a nice extra flavor and would work well together. For example, if I had a turkey breast deli meat sandwich, a chicken schnitzel sandwich or even a grilled cheese sandwich I think the subtle mashed potato flavor might even enhance the sandwich and not ruin it.

Both Green Lite's and Pillsbury's Pesach Rolls pass the potato starch test in my opinion. I would enjoy eating them all year round and not just on Pesach. 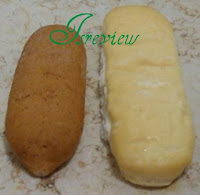 I know Green Lite is a gluten free company with many different cakes and breads available all year but I did not taste anything from their chametz line to do a comparison.

I found both rolls to be just as satisfying as any chametz roll of equal size.

They did dry out a bit faster than a chametz roll would but that's likely because I warmed them directly from the freezer. If I was taking them with me on a trip I would just let them defrost on their own, the crust may not be as crispy but I still think I would still enjoy them like that.

Bottom Line: I found both the Green Lite and the Pillsbury Pesach Rolls to be satisfying and enjoyable. Granted it's not a fresh baked authentic baguette, we can't forget its Pesach after all, but these rolls absolutely fill a need for those who can't eat matzo and still want to feel full at the end of their meal. No they are not cheap but in some cases they are much needed and it's wonderful that they are available and tasty.

They are both Kosher and Kosher for Passover - Rabbinate Yavneh
Kitniyot