Both Nestle Crunch and Telma have a nougat filled cereal for Pesach. I tasted both of them.

This cereal is made primarily with matzo meal but also has some potato starch in it. Thankfully the potato starch taste is only an after taste; the nougat flavor masks it fairly well. Crunch Rolls Cereal "kind of" passes my "potato starch test".

When I added milk I did taste a slight salty undertone. I'm not sure if that’s from the potato starch or not but I didn’t really enjoy the touch of salt. The milk did turn into a light chocolate milk but it did not make the cereal completely soggy, which is a good thing in my opinion. 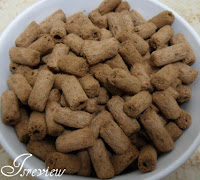 Compared to the chametz version there is less nougat filling and they are less crunchy even without milk, both of which I somewhat "missed" about the Pesach version.

As with most of their cereals Nestle Crunch added 9 vitamins and minerals  to this Pesach version as well, including a few B vitamins, iron and folic-acid to name a few.

For a Pesach breakfast cereal I would say Nestle Crunch Rolls is fairly good. I personally would more likely eat it as a snack than a cereal but most sugar cereals I prefer as a snack rather than with milk as a breakfast option. 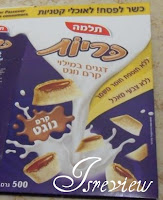 Cariot is much crunchier than "Crunch's Nougat Rolls Cereal" and Cariot also has much more nougat filling than the Crunch Rolls. So right off the bat I liked Telma's Cariot better than the Nestle cereal.

Cariot is made with matzo meal so they are not gluten free but they have no potato starch. That's a HUGE plus for me. Taste wise I actually could not really tell that they were a Pesach cereal but I didn't have the chametz Cariot at the same time to do a proper comparison.

I actually think the Pesach Cariot would make a great snack. As I mentioned above I prefer cereal as a snack anyway, but I added milk for the purposes of this review. With milk they obviously lost some of their crunchiness but they didn't become too soggy. The benefit of the added milk was that the nougat filling became softer and "yummier" in a way. The milk didn't turn into chocolate milk it only got a very slight chocolate color tint.

As a snack these are a big winner for me! I'm actually quite impressed with Telma. Maybe I should also try their new Kosher for Pesach cornflakes?

Cariot Nougat Filled Cereal has no added preservatives and no food coloring. Even though many don’t eat kitniyot on Pesach, a friend pointed out that these can be a good option for the kid's breakfast on Shabbat Ha'gadol morning, when many might already have koshered their kitchen for Pesach. They can also be given as a snack while you're cleaning for Pesach, so you don’t have to worry that the kids will get chametz around the house in areas that are already chametz free.

Bottom Line: The Kosher for Pesach cereals are not cheap but most kosher for Pesach items are expensive. I did enjoy both of these cereals but personally I much preferred the Cariot from Telma. I'm likely to eat them as a snack and not necessarily as a breakfast cereal.