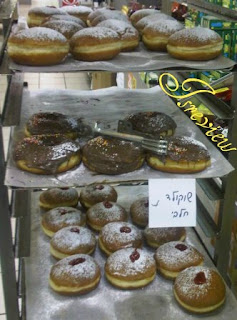 At the beginning of November I was a little taken aback and slightly sad to see Chanukah doughnuts/Sufganiot were already being sold at local supermarkets. It just felt too soon. I wish stores etc. would let us live in the present for a moment and not rush the next holiday or "time of year" on us. It felt like the moment Sukkot was over they had to kind of push Chanukah on us, even though in actuality it was almost 2 months away. Given my rant, you may be wondering why then I am reviewing/comparing these doughnuts almost 3 weeks before Chanukah. Well I thought I would take "inspiration" from the Haggadah where, in a totally unrelated context, it says "יכול מראש חודש" meaning "You can begin from Rosh Chodesh", so in honor of today, Rosh Chodesh Kislev, I thought it would be an appropriate post. Plus given that the doughnuts have been in the stores for almost a month I figured it was as good a time as any to do this review.

So here is my review/comparison of Aroma's, Mega Bool's and Sufersal's doughnuts. 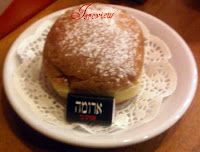 Aroma only sells a jelly doughnut. Theirs is the first one I tasted. It was a small to medium sized doughnut. I would guess about 7.5 cm in diameter but I didn't actually measure it so that’s an educated guess :).


The Aroma doughnut was extremely dry and crumby. I really didn't enjoy the texture at all. Part of the problem seemed to be that they put the doughnut in some sort of oven to warm it up before serving it. Had I known they would do that I would have asked them not to, but I found out too late. The re-warming could have been the reason it got so dried out. Regardless I really didn't enjoy the heavy texture, lack of fluffiness and blandness of this doughnut. I didn’t think it was worth ordering another one and asking them not to warm it up. I already knew, to me, it wasn't worth another 4.00 NIS. 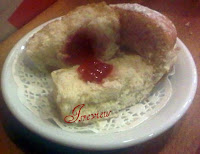 The small amount of "jelly" filling was by no means anything I would consider jelly. Instead it was a red colored artificial mixture that tasted more like a sugar water than anything else. I really did not care for this "jelly filling" so in the end the fact that there was so little filling actually didn’t bother me all that much.

I guess the only good thing I can say about Aroma's Jelly Doughnut is that it didn’t taste or feel too oily.

The day I went shopping Mega Bool had both Jelly and Caramel filled doughnuts available. I got one of each. These Mega Bool doughnuts were much bigger than the Aroma one; they were 10 cm in diameter.

Both of the Mega Bool doughnuts I got were more on the oily side. They also seemed quite doughy. Even though the doughnuts must have spent enough time in the hot oil, to get that greasy, they apparently didn't bake through and through the way they should've. My guess is the oil was too hot so the outside got golden brown before the inside was fully done.

The Mega Bool doughnuts had considerably more filling, in both the jelly and caramel doughnuts, than the one I got at Aroma. 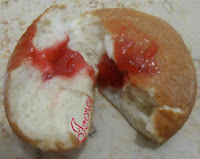 The jelly in the Mega Bool doughnut was thicker than the water downed concoction that Aroma called "jelly". The one from Mega Bool felt a little more like a jelly texture and tasted a bit more like a strawberry flavored mixture. Still it was far from being a strawberry jam of any kind. But hay, I think almost all Chanukah "jelly doughnuts" are made with some artificial red mixture and are in no way a really jelly or jam so this did not surprise me at all.

The caramel filling was sweet but not overly sweet. It was exactly what I expected it to be and it was enjoyable enough.


I was disappointed that Mega Bool put the doughnuts in a bag and not a plastic container. I would've liked to have been able to take them home without them getting all messed up. Seems they were out of the plastic containers that day. I'm sorry that my photos of these doughnuts are not as good. Most of the confectionery sugar and the bit of filling that decorated the top are missing. I'm guessing you kind of know what they look like in any event so it may not matter all that much.


Pricewise the Mega Bool ones were the cheapest of the three that I tried. Their Jelly Doughnuts cost 2.50 NIS each and the Caramel ones are 3.50 NIS each.


Shufersal's doughnuts were more expensive than the Mega Bool doughnuts. The mini jelly ones cost 2.99 NIS and the full sized caramel ones were 3.99 NIS each. 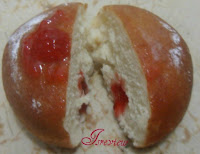 I thought they were baked through and through, more so than the ones from Mega Bool. I also felt and tasted a little less of an oily residue on them. Still they were not completely dried out like the one from Aroma. The full sized Shufersal doughnut was more dense than the Mega Bool ones and the mini jelly doughnut was even denser and slightly dryer than the full sized caramel one. Still neither size from Shufersal was too dry. I actually liked that they were a bit denser yet still light and fluffy enough.


The jelly filling seemed almost identical to that of Mega Bool's. The caramel filling had a slightly thicker, more pudding-like texture to it than the one from Mega Bool. I think I actually preferred it, then again had I not had them side by side I don’t think I necessarily would have picked up on it, because it wasn't all that big of a difference. 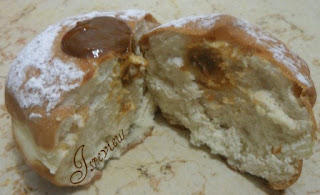 There was a nice dollop of the filling on top of the Sufersol doughnut but once I cut them open there was a little less filling than the ones from Mega Bool.


All in all I was happy with the Shufersal doughnuts. I thought, for a supermarket doughnut, it wasn’t half bad.


Shufersal did have the plastic containers so those doughnuts made it home looking closer to the way they look in the store.


I was going to check out the Rami Levi doughnuts because I heard they are under 2 NIS per doughnut but the Rami Levy branch I was in did not have any doughnuts, sorry about that.
﻿


Bottom Line: I really disliked the dried out, smaller Aroma doughnut and I would not buy that again. Had the Mega Bool doughnut been slightly less oily and baked through and through that may have been the doughnut of my choice. But given those two issues, of all the doughnuts I tasted, I'd say the full sized Shufersal doughnut was the best of the bunch. Don’t get me wrong they were not "award winning doughnuts" but given the options they got the highest rating of the group.

I know there's still plenty of time until Chanukah and if not for this blog I would not have touched any doughnuts until the holiday began so if it seems too early for you to buy doughnuts check back here much closer to Chanukah because I have every intention of reviewing this year's Roladin doughnuts closer to the holiday.

Disclaimer: All items were purchased by me. No one is paying me for this review. All opinions are my own.
Posted by Isreview at 12:28 PM