I noticed three new (limited edition) Pesek Zman chocolate wafer finger bars on the candy shelf and could not help but try one. The three new flavors are Cappuccino Truffles and Peanut Butter.

I've mentioned in the past that I'm not a huge coffee flavor fan/coffee drinker so the cappuccino one didn't sound so exciting to me.

The Truffles option is a white-chocolate coated bar and just seemed like a fancy way for them to say white-chocolate & milk-chocolate combo. Since I didn’t love the combination in the White Kif Kef or in thier new Neshikolada bars I decided to skip the truffles Pesek Zman too.

I didn’t remember ever seeing a peanut butter flavored Elite chocolate bar so I was fairly impressed that they finally chose to make one. But thanks to Google I found out that in 2007 Elite actually had a peanut butter flavored Big Bite Pesak Zman on the market. I must have missed that somehow. So even though it looks like a very different bar it's still peanut butter flavor so I guess this new Pesek Zman flavor is a "comeback" of sorts as opposed to a completely new idea, either way it was new to me and I was very happy to taste it.


As soon as I opened the wrapper and even before I put the chocolate wafer finger in my mouth I could smell the rich peanut butter aroma. There was no doubt in my mind that peanut butter was the star of this candy bar.

The milk-chocolate coating was soft and creamy but, being the dark-chocoholic that I am, I think I would have preferred a bittersweet-chocolate coating instead. I thought the chocolate needed to be a richer contrast to the peanut butter. That having been said ,I thought the milk-chocolate was just fine. Given how strong of a peanut butter flavor this treat has the chocolate seemed to be a secondary flavor, so it didn’t really matter all that much.


I actually thought there was a little too much peanut butter cream in the wafer finger. But on the other hand it made the Pesek Zman a very rich treat, after just a few bites I felt like my craving was curbed and I put the rest away for some other time. 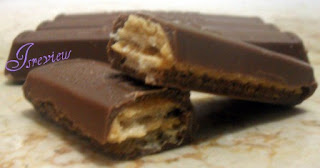 The wafer part was thicker and crisper than I had anticipated it would be. That may have been because of the somewhat "stark" texture contrast between the harder wafer and the softer chocolate coating & peanut butter filling. I don’t think the chocolate was soft because it melted in the heat or anything like that, after all it's November, so although today was a somewhat sunny day, it's not like the heat of the Israeli summer. The other possibility is that I automatically compare all wafers to my favorite wafer company; Loacker and even thought the wafer part of this Pesek Zman is perfectly fine I don’t think they are as amazing as some Loacker wafers I love to snack on.


Bottom Line: For me "a little went a long way" with this rich creamy peanut butter flavored Pesek Zman chocolate coated wafer fingers. Even thought it wasn’t my all time favorite wafer I thought this Pesek Zman was wonderful and enjoyable. If this "limited edition" bar stays on the shelf for a long while I can absolutely see myself buying it from time to time when I have a peanut butter/ chocolate combo craving.