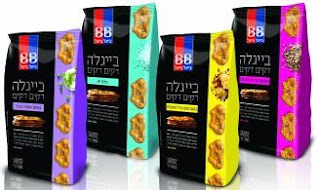 ﻿So it didn’t take long for Bagel Bagel to get on the "flat pretzel band wagon" that Osem started with their "Shtuchim" and Meir Bagel continued with their "Shtuchaleh". But Bagel Bagel took it to the next level and they put out four different flavored flat pretzels that they're calling "Dakim Dakim". Dak means thin so Dakim Dakim basically means ultra thin. The four flavors are Cheddar Cheese, Sea Salt, Sour-cream 'n Onion and Seeds 'n Garlic (poppy seeds & sesame seeds)

These Bagel Bagel flat pretzels are shaped in a classic "knot-like pretzel loop" whereas the Osem and Meir Bagel ones are a round circle. 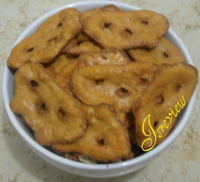 
The pretzels seem to have a little "kick" to them. I think I picked up on a touch of chili flavor but they aren't really "hot 'n spicy".
My biggest issue with these Bagel Bagel pretzels is that they are non-dairy so they cannot be made with real cheddar cheese or milk of any sort. That was clear to me once I tasted them. To me they in no way resemble or can replace cheese doodles, Snyder's cheddar cheese pretzel pieces or the cheese flavored crackers I was talking about before.

Another thing that bothered me about these pretzels was that I didn't think the cheddar cheese flavor was "integrated" properly or completely with the pretzel. It was as if the flavor was an "afterthought" and not "baked into" the pretzel the way it seems to be with the Snyder's ones.
﻿
I know all cheddar cheese flavored snacks leave a lot of "orange residue" on your fingers but these Bagel Bagel pretzels seem to leave way more of the orange powder than usual. I didn’t like that either.

And now for those of you who may get a kick out of the commercial for these pretzels here it is... (you can read a translation and interesting statistics on Rachel Neiman's post over at Israel1ty blog)


Bottom Line: Compared to other cheddar cheese flavored snacks I was disappointed with these Bagel Bagel pretzels. I really wanted to like them but for many reasons they just didn’t live up to what I was expecting. Still they weren’t awful, if you like really salty, somewhat cheese flavored snacks you may enjoy these. I just think they need a lot of improvement for me to buy them again.

Disclaimer: All items were purchased by me. No one is paying me for this review. All opinions are my own.
Posted by Isreview at 12:20 PM

Email ThisBlogThis!Share to TwitterShare to FacebookShare to Pinterest
Labels: pretzel