Very often when I get home from a long day the last thing I want to do is start cutting up vegetables and making a fresh pot of soup but I'd be thrilled to have a hot bowl of soup made from real vegetables and not an instant powered mix. Bags of "fast freeze" frozen vegetables and legumes for just such occasions is not a new concept but Sunfrost took it to the next level and now has a line of soup bags that has everything you need to make a "fresh" pot of soup in one bag. You get the vegetables and or legumes as well as a "stock mix"". It's not a powder stock but a "puree" of ingredients that is the appropriate "stock" for the soup in your bag.

For example I got the "orange vegetables soup" which has cut up frozen pieces of sweet potato, carrot, pumpkin, potato, onion and celery. The small packet of a "stock mix" in this case is made of water, oil, sugar, salt, onions, spices, yeast, corn starch, citric acid and rosemary extract.


All you have to do so is put the frozen vegetables in a pot with 3.5 cups of water and add the packet of stock mix. Once it comes to a boil you let it cook for 10 minutes. After which, in the case of this "orange vegetables soup", you can blend it with a hand blender to get a nice thick texture. 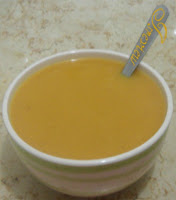 If you'd rather a vegetable soup with big chunks of vegetables in it you can leave it as is, you don’t have to blend it. In this case I wanted a thick soup so I chose to blend it. I have to say it was super simple and took almost no time at all.


The end result was a bowl of delicious soup that was ready in about 15 minutes and took almost no effort on my part to make. Not only did I enjoy that but I absolutely enjoyed the soup as well.


These Sunforst bags of soup have no MSG, no artificial food coloring and no added preservatives.


Aside from this "Orange Vegetables Soup" the store I was in had Pea Soup, Broccoli Soup, Lentil Soup and Bean Soup but according to the press release there is also a corn soup in this line in case that’s the soup of your choice.

Bottom Line: With this Sunfrost Frozen Soup Mix, as opposed to the Maimon's Pancake Mix seeing the words "just add water" was a welcomed and wonderful notion. I for one was happy to oblige. I have every intention of buying this "orange vegetables soup" bag again and I hope to try some of the other options as well.

* A few days after I wrote this post I tried the Pea Soup it had peas, potatoes, onions and celery in it. I blended it after cooking just as I did with the Orange Vegetables Soup. I enjoyed it very much as well. It was just as easy and quick to make and it tasted wonderful. I plan I buying this one again in the future as well.

Disclaimer: All items were purchased by me. No one is paying me for this review. All opinions are my own.
Posted by Isreview at 12:12 PM