Carmit's latest Marshmallow treat is a box of 5 individually wrapped colorful "twisted" marshmallows that are coated in a thin layer of milk chocolate.


The first thing that came to my mind when I saw the press release for this product was wow that sounds perfect for s'mores I gotta check them out.

I was surprised how expensive this box of milk-chocolate coated marshmallow was. 6.00-7.00 NIS for 5 marshmallows just seemed like a little more than it should have been. Each marshmallow is about three inches long and weighs .16 grams. Somehow I expected it to be about half that price.

When I mentioned this to my friend who lives in the US she said that Lieber's sells a chocolate coated marshmallow in the US that costs 59 cents in her local shops. The Lieber's one is about 5 inches long and weighs .20 grams. If my math is correct given the difference in size they end up being about the same price each. 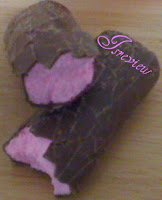 After a few web searches I'm almost sure that Carmit actually makes Lieber's marshmallows. Still it’s not the exact same product. My friend in the US was nice enough to try the Lieber's one and she said that the Lieber's marshmallow is all pink and not twisted (whereas the Carmit one is made up of four colors twisted together; white, yellow, orange and pink.) She thought…" it tasted surprisingly nice and the milk chocolate worked well with the marshmallow" she added "but I do think 59 cents, for one, is pretty over priced... It's not a fancy truffle or something like that". I agree with her, I think 1.40 NIS or 59 cents is expensive for a 3 inch or 5 inch milk-chocolate coated marshmallow. 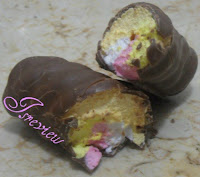 As I mentioned before chocolate coated marshmallows automatically make me think of s'mores. I actually had some graham crackers in the cupboard so I couldn’t help but make some s'mores in the microwave. Considering they were not made over an open flame I thought they came out pretty good and I enjoyed them. 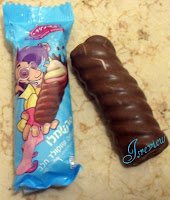 Bottom Line: I thought Carmit's milk-chocolate covered marshmallows were perfectly fine and lived up to exactly what I expected them to be but I think they are too expensive. There's no reason they should be about 1.20-1.40 NIS per marshmallow. I think that’s kind of outrageous and not justified.

Disclaimer: All items were purchased by me. No one is paying me for this review. All opinions are my own.
Posted by Isreview at 12:13 PM