According to the Old Farmer's Almanac the summer officially begins here in the Northern Hemisphere this evening, but the weather in Israel was ultra hot this past week or so. It felt more like August then June and keeping hydrated was extremely important. For me there’s nothing like an ice cold cup of water to really quench my thrust but from time to time I do enjoy something like a juice or a soft drink just to "mix it up" a little. So recently I tasted a few new drinks that I plan on reviewing within the next few days. Today I'll write about the new flavors from PriGat’s Shake line of drinks.

There are three new flavors in this line; Pineapple Banana, Pear Lychee and Pear Cherry. I’m not a fan of pineapple drinks so I skipped the Pineapple Banana and tried the other two.

As I mentioned last year in my review of Prigat’s Kiwi Pear and Mango Banana Shakes I don’t think PriGat chose the right name for this line of drinks because these are not Shakes in my opinion but simply juices. For now I'll ignore the name “Shake” and just talk about the taste of these fruit nectars.

The carton says the drink has a minimum of 40% fruit in it, yet the first two ingredients are water and sugar, that didn’t surprise me I was kind of expecting that to be the case. Still I clearly tasted each fruit flavor listed in the ingredients. Maybe the pear was more dominant than the cherry but I thought both flavors were present. I even picked up on the apple concentrate they added to the mix. In the Pear Lychee drink I could also taste apple and banana. Naturally I felt the banana made the drink a little thicker and drier but still enjoyable to me. 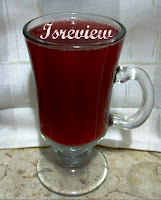 I would say that since I liked almost all the flavors listed in the ingredient I enjoyed these drinks. As someone who doesn’t really like apple drinks I could have done without the apple but it was by no means a leading flavor so it wasn’t all that big of an issue for me.

Bottom Line: I liked both of the new PriGat Shakes I tried. Yes they were slightly sweeter than I would have liked them to be but I was expecting them to be too sweet for me and I can always dilute them with water. As a whole both the PriGat Pear Lychee and Pear Cherry Fruit Nectars lived up to my expectations and I got exactly what I was anticipating; sweet fruit drinks in slightly more interesting flavors.

Disclaimer: All items were purchased by me.  No one is paying me for this review. All opinions are my own.
Posted by Isreview at 12:00 PM