Update: These Puffed Doritos Won a Productof the Year Awards 2013.

Elite has a new Doritos snack on the market called “Doritos Menupach” literally translated to “inflated” but it’s basically a puffed Doritos. It comes in two flavors; Barbeque and Sour-Cream ‘n Onion. I am not a fan of onion flavored snacks so I chose to try the Barbeque flavored one.

I was a drop surprised that the puffed Doritos were smaller than the regular sized Doritos. I was kind of expecting them to be the same size as your average Doritos but they were like a 3cm mini sized triangles. As soon as I thought about it, it actually made perfect sense that they would be bite size. Since they are puffed once you bite into them they fall apart, if they would be full size Doritos they would make a big mess. Turns out I think they are the perfect snack size.


The thing I didn’t like about them was the flavor. I rarely think snacks actually have a barbeque flavor to them but in this case I don’t think they really managed to get that fake barbeque flavor snack companies like to use. To me these tasted more or less like a sweet ketchup flavor you have on many potato or corn snacks on the market. 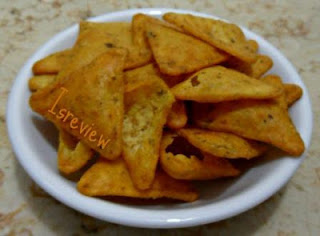 It’s not “straight up” ketchup there is a barbeque flavor attempt there but it’s a fail in my book. I don’t like that sweet fake ketchup flavor. The only time I ever have ketchup is with french-fries, and more often than not I eat my fries alone without ketchup, but I absolutely dislike the fake ketchup flavor that I have tasted on many snacks. In this case I was hoping for more of a barbeque flavor but it wasn’t there for me.

I did like the puff texture of this corn snack and I think this could be a fun route for Doritos to go in. I can see myself liking it in a plain salt/original Doritos flavor. Hopefully that will be a future option they add to this line of Puffed Doritos.

Bottom Line: I liked the idea, size, shape and texture of these Puffed Doritos snack but I didn’t like the so called Barbeque flavor. To me it tasted more like a fake sweet ketchup flavor that I don’t enjoy. If Doritos makes a plain salt version I think I may enjoy that very much.

Disclaimer: All items were purchased by me. No one is paying me for this review. All opinions are mine
Posted by Isreview at 3:04 PM