In my review of PriGat’s Shakes I told you that I tasted a few new drinks recently so here’s another one of the new drinks I was referring to.

Schweppes has added four lemon-flavored carbonated soft drinks to their line of drinks. The new flavors are; Lemon Lime, Diet Lemon Lime, Lemonade and Pink Lemonade. I don’t think these are all that new to Schweppes. I think they have been (or still are sold) in other parts of the world. I even saw an online petition to bring back Schweppes Pink Lemonade but I’m not sure what country the person who started that petition is from. As far as I know, these lemon sodas are new to the local Israeli market. I guess the person who started that petition can now come here to Israel and buy as much as she wants.


I decided to try the Pink Lemonade partly because I don’t remember ever tasting a pink lemonade soda and partly because I was curious to see if I could taste the berries they used to make this drink such a pretty baby pink color. 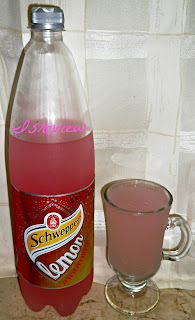 Although I don’t really like carbonated drinks I do very much enjoy tart lemon flavors so I was interested to see if the pink lemonade would be lemony enough for me that I wouldn’t really care about the carbonation. I have to say it was nice and tart, actually perfectly tart in my opinion. The carbonation did bother me but if I let my glass sit a bit it became less carbonated and I quite enjoyed the “flatter” tart pink lemonade soda.

I can’t say that I tasted or noticed the berries but given that they are listed as second to last in the ingredients that didn’t surprise me much. The berries must have just been used as a natural food coloring and not to add flavor.

I also tasted the new Schweppes Diet Lemon Lime soda and it was fine. I though it tasted like your average diet lemon soda, not tart like the Pink Lemonade, just a regular diet lemon soda. I thought it was similar to something like Diet 7up or Diet Sprite. I didn't think it was special or different in anyway, so not much for me to report about it.

Bottom Line: As someone who likes fairly tart lemon flavors I enjoyed the sour/tart taste of this Schweppes Pink Lemonade. I would rather it not have been a carbonated drink but I do think it lives up to what Schweppes promises it would be; a pretty pink tart lemon soda.

Disclaimer: All items were purchased by me.  No one is paying me for this review. All opinions are my own.
Posted by Isreview at 11:30 AM