Storck; the German company behind brands like Toffifee, Merci and Werther’s Original (who have a new sugar-free coffee butterscotch candy on the local market I plan on reviewing soon), now have imported to Israel a new candy called Mint Chocs. It’s a hard mint candy filled with a soft cream chocolate center. Just the fact that Mint Chocs is made by a company that produces so many successful candy/chocolate products made me think there is a good chance this candy will be a winner as well. Being a big fan of the mint/chocolate combination I was intrigued and happy to try this candy.


Most of the mint/chocolate combinations I know are more like After Eights or York Peppermint patties; where the chocolate is on the outside and the mint flavor is inside. Not to mention that the mint in both the After Eight and the York candy is not a hard candy but more of a softer filling kind of thing, so this Mint Chocs candy is actually very different.  Maybe I shouldn’t be comparing them one at all, then again the flavors involved are the same so in a way the comparison is inevitable in my mind. 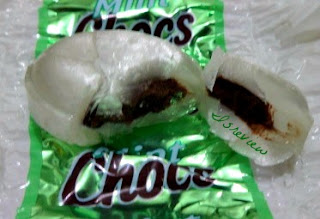 I had the candy in my mouth for quite a while with no hint of chocolate what so ever. It was just a sweet and enjoyable minty candy until I got fairly close to the end of the candy and suddenly I started tasting the chocolate cream filling. I really enjoyed the way the chocolate slowly seeped out and combined with the mint until it was more chocolaty than minty. The contrast in taste and texture was enjoyable and I thought they worked really well together.

Bottom Line: I liked Storck’s individually wrapped Mint Chocs candies. I thought it was nice that although, to start with, it’s a mint candy it wasn’t too overly minty. I also really liked that when I hit the chocolate center the somewhat rich chocolate cream filling added a wonderful second dimension of flavor and texture. I'm glad the store only had a big, 425 gram, bag of these Mint Chocs candies because I plan to enjoy them all.

Disclaimer: All items were purchased by me. No one is paying me for this review. All opinions are mine
Posted by Isreview at 1:21 PM