Ma'adanot, known for their frozen pizzas and bourekas have a new line of frozen bourekas.

In an attempt to make a healthier product Ma'adanot used canola oil in the phyllo dough of these bourekas, as opposed to margarine. According to the press release these bourekas have 70-80% less saturated fat than Ma'adanots other bourekas.
There are 4 flavors in this new line of bourekas; Sweet-Potato, Spinach, Broccoli and Mushrooms. I tasted the Sweet-Potato one.
It did taste somewhat different to their other bourekas. To me it seemed lighter and less oily than turnovers made with margarine layered phyllo dough. I actually preferred this canola oil phyllo dough. Even thought I may not categorize turnovers as a healthy dish, I think it's wonderful that Ma'adanot are trying to give us a healthier option.
For some reason I was surprised that the sweet-potato filling had onions and black-pepper in it. I just assumed it would be more on the sweet side as opposed to a savory turnover. Seeing as I don’t love onions I was quite disappointed and would have preferred them not to have been there, but if you do like onions I think you would see them as a welcomed addition to the mix.
Maadanot's said that this line of bourekas has about 40% more filling than there other products. I actually did think it had a nice dough to filling ratio. 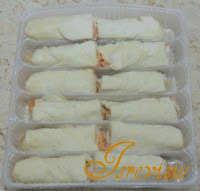 The bourekas come 12 in a package. I liked how the plastic they are sitting in is sectioned off so it holds each of them all in its place. I found it very convenient that I didn't have to work hard to separate them one from the other, when they were frozen. Unfortunately the package is not reclosable so I had to transfer what I wasn't using, at the moment, into a vacuum packed zip-lock bag to protect them from freezer burn.
Bottom Line: Had this Ma'adanot Sweet-Potato Boureka not had onions in it I think I would have enjoyed the turnover much more. I give them points for using canola oil and making a "lighter" boureka. I think it's a step in the right/healthier direction but there may be some people who will miss the margarine phyllo dough they are used to.

Update: Today, in Shufersal, they were giving out samples of this new Ma'adanot Bourekas, in the mushroom flavor.This one also had a large amount of onions in the filling. To me, the onion seemed to be the overpowering taste.

Another thing that struck me was that although the outside was golden-brown the inner layers of the dough were not properly cooked and tasted very doughy to me. I had the same situation with the sweet-potato ones, I had tasted for this review, but I thought it was because my oven might have been on too high, so it baked the outside too fast and left the inside undercooked. I had ended up cutting the sweet-potato ones in half lengthwise and putting them back in the over to bake some more. But when I tasted the sample at the supermarket today and it had the same issue I thought maybe it has something to do with the borurekas themselves. Or maybe the toaster-oven they were using at the sample stand was also on too high, I don't know, but I thought I would point it out to you.
600 gram package- 12 Bourekas – 19.00-22.00 NIS
Kosher- Parve Rabbinate Gan Yavne
Disclaimer: All items were purchased by me. No one is paying me for this review. All opinions are my own.
Posted by Isreview at 2:35 PM