Osem has a new Ketchup on the market. This new Ketchup is a "Pizza Ketchup"; it's Osem's ketchup with added pizza-sauce spices, so you easily prepare your own "pizza" at home

The new Osem Ketchup is in a squeeze bottle, just like their regular ketchup, they actually look almost identical, you can tell them apart by the photo. On this new ketchup there is a picture of a pizza pie
I'm not a huge fan of Osem's Ketchup; truth is I don’t use ketchup that often to start with. I was really disappointed when I realized that Heinz Ketchup was not Kosher for Passover, here in Israel. Considering how many french-fries we eat on Passover I really wanted decent ketchup but I had no choice other than Osem's Ketchup. I really didn’t enjoy their ketchup and ended up eating most of my fries without any ketchup at all
When I saw this new "Pizza Ketchup" I wanted to give it a try and see if it's an improvement over their regular product. When I tried the "Pizza Ketchup" as a dip for french-fries I did not enjoy it. It tasted too much like the original Osem Ketchup that I don't like and, in my opinion, the added spices were not the right flavor for french-fries. That should not have surprised me, it's not intended to be a dip for french-fries

So I used it for its intended purpose and made pizza. I found the squeeze bottle to be very convenient when I was preparing my "pita pizza", as per the directions on the back of the bottle. I liked that I had more control over how much sauce I was adding and it was much neater than the other bottled pizza sauces I've tried in the past

I found that the consistency of this "pizza ketchup" was too thick for my liking, actually much thicker than other store bought pizza sauces. I added some shredded mozzarella cheese and put it in the oven 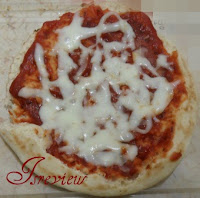 The end result was tasty enough, granted it was nothing even close to real pizza. It was a glorified grilled cheese on a fresh, crispy toasted pita with delicious, shredded mozzarella cheese and bad pizza spiced ketchup
Osem's Pizza Ketchup is made of all natural ingredients; it has no preservatives or food coloring
Bottom Line: This new Pizza Ketchup is exactly what it claims to be, it's Osem's Ketchup with added pizza spices. Considering I don't like the taste of Osem's Ketchup It wasn't surprising that I didn’t like the taste of this new Pizza Ketchup either. I know there are many kids that love Osem's Ketchup and I think they are likely to enjoy this new version on pita with melted cheese but it's far from anything I consider pizza sauce
750gram bottle -11.99 NIS
Kosher Parve Badatz
Disclaimer: All items were purchased by me. No one is paying me for this review. All opinions are my own
Posted by Isreview at 2:36 PM