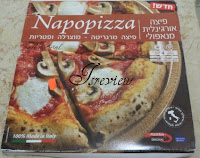 I noticed this new line of frozen pizza in Mega Bool the other day. The photo on the box looked so enticing, I had to try it. I know better than to "judge a book by its cover" but since I'm not a huge fan of Ma'adanot frozen pizza, I thought it would be nice to know if there is any good frozen pizza available in the supermarket here.

I put the pie in the oven, shortly after I noticed a puddle of water had formed in the center of the pie. That was not a good sign, yes I know it's frozen but I had not noticed a lot of ice on the pie before it went into the oven. Maybe the water was coming from the mushrooms? I don’t know, but there was so much water I actually carefully patted it off with a paper-towel and put the pie back in the oven.
After quite a long time, way more than the suggested 4 minutes, I took the pizza out of the oven.
My next disappointment was that the cheese tasted rubbery, it was far from the soft oozing melted cheese I was hoping for. 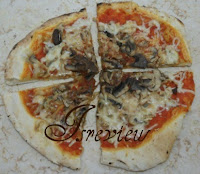 The pie must have been very water logged because although the crust was perfectly crispy the rest of the pie still tasted raw and undercooked. Yet again, even though I had already sliced the pizza, I put the other 3 slices back in the oven.
No matter how long I left it in the over it just did seem to bake the center of the pie. Yes it completely dried out all the cheese and the crust started burning but the dough under the cheese and above the crust just did not bake. Like I said, it could be it was the mushrooms fault, but whatever the case, I really did not enjoy the pizza at all.
Bottom Line: Maybe I should have kept it simple and bought the plain Pizza Margareta Mozzarella but considering how waterlogged and tasteless this unbakeable mushroom pie was, I have no intention of spending another Shekel on any Napopizza product ever again.
370-400 gram pie 17.99 NIS
Kosher Dairy Cholov Yisrael Triangle K D
Disclaimer: All items were purchased by me. No one is paying me for this review. All opinions are my own.
Posted by Isreview at 3:03 PM