The head Chef at Ben Ami made a conscious decision this year to try and put a "healthier" spin on the traditional Chanukah products; Sufganiyot and Levivot. I know he isn’t the first to try such an idea but I was still curious to see what he came up with here are my thoughts.


When it came to the sufganiyot he didn’t want to take part in the "can I come up with the most original and high caloric doughnut filling" competition that Roladin and Ne'eman took part in. Instead he focused on filling his doughnuts with different homemade jams and preserves. I didn’t buy any of those but they had a nice rustic and homemade look to them.


He also prepared a baked doughnut that he filled with a touch of vanilla cream. That I did taste.

As much as I respect his attempt to come up with a healthier doughnut I just didn’t really enjoy it. I didn't think it should be called a doughnut. It looked and tasted more like a super sweet challah roll with dab of vanilla cream and sprinkled with confectioner sugar. 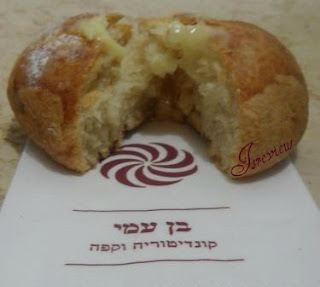 The filling was tasty and enjoyable but there was a very little bit of it and only on top. He didn't put it as a filling inside the doughnut just as a little dollop on top.


The doughnut on the other hand just didn’t work for me. It wasn’t quite a challah roll or a yeast cake/rugelah and yet it was far from a doughnut. But that wasn’t my issue with it. I have no problem coming up with a new category for it. The thing I didn’t like about it was, I found the dough to be way too oily I didn't really enjoy that.


At first I thought if I'm going to get that ultra oil taste I may as well "go for it" and eat a "real"/fried doughnut. Then when I mentioned that to my friend she brought up a very good point. She said it's very likely that in an attempt to keep the doughnut healthier the chef chose to use oil in place of the margarine (or another shortening) that's high in saturated and trans fats. She explained to me that in baking when she has replaced the margarine in a recipe with oil the dough ends up more oily but in actuality it's better for you. 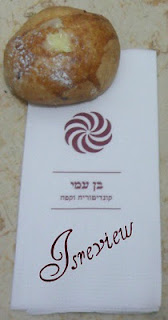 I don’t know for sure if that’s the case here and maybe Ben Ami's chef used part margarine and part oil. But once she mentioned that I thought it's very likely that he was further trying to cut back on the unhealthy fats and replaced them with healthier oil. If that’s the case I give him credit for that. Although I didn’t love the oily taste, I didn’t think it was awful, plus knowing it's most likely healthier it kinda makes it worth it :)


Then I tasted the baked Levivot come back tomorrow for my full review of them.


Ben Ami has coffee shops/restaurants in Jerusalem, Tel Aviv, Herzliya and Givatayim. Take away and catering is available as well.

Disclaimer: All items were purchased by me. No one is paying me for this review. All opinions are my own.
Posted by Isreview at 12:46 PM