When I saw Ne'eman's ad for this Chanukah's line of sufganiyot some of the different flavors seemed interesting to me. Ne'eman has come a long way from their humble beginnings, back in 1944 when the founder and grandfather Rabbi Baruch Ne'eman peddled his baked goods through the streets of Jerusalem's Bucharim neighborhood in a baby carriage and sold pastries, including sufganiyot, to the locals (as you see depicted in the pretty mural-like drawing on the cool box I got when I bought the sufganiyot).

Ne'eman now has about 40 branches all over the country. Since I think many of my Israeli readers have access to Ne'eman doughnuts I decided to give them a try and post a review.

Ne'eman has 13 different doughnuts in this year's line of sufganiyot. Here's what I thought of the 5 doughnuts I tasted.


As would be expected it seemed that Ne'eman used the same basic doughnut base for all the sufganiyot but came up with many different fillings, coatings and topping for their Chanukah 5772/2011 line of sufganiyot. The doughnuts themselves were light and fluffy yet I absolutely tasted that they were fried in deep oil. To me it seemed like they used a classic Israeli Chanukah sufganiyah recipe. There was something nice and "nostalgic" about that.

I think I liked their doughnut recipe better than all the supermarket ones I reviewed here , still I don’t think these Ne'eman doughnut will be winning a pastry award any time soon.


Size-wise all the doughnuts I got were about 8-9cm. in diameter. 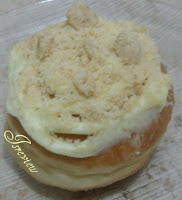 As I mentioned in my review of Kapulsky's Sugar-Free Cheese Cake I really enjoy a good cheese cakes so when I saw the this doughnut flavor on Ne'eman's ad it intrigued me most and made me want to try their doughnuts, so that’s the one I tasted first.


The cheese cake filling was a thickish custard-like filling. At first I had a hard time tasting the cheese cake flavor at all, but once I was able to get past the somewhat margarine/shortening type taste, I think I picked up on a cheese cake flavor. Maybe it was mind over matter and had I not known that Ne'eman was going for a cheese cake flavor I may never have noticed it at all. The margarine-like taste of the cream kind of surprised and disappointed me. Given that these doughnuts are dairy I was not anticipating that kind of an issue.


This Cheese Cake doughnut was disappointing but not awful. I think it needs improvements. I may have liked the idea of this doughnut more than the doughnut itself.


The next Doughnut that seemed fun and interesting to try was the
Bamba Flavored Doughnut. 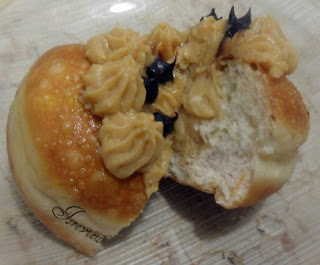 The first day I stopped by Ne'eman and saw the doughnuts the Bamba one had the same pretty "flowers" and dots of chocolate as you see on the one I got but it also had an actual bamba snack stuck in the middle. I didn’t buy doughnuts that day because they didn’t have the cheese cake one that I really wanted to taste. The day I did buy the doughnuts for some reason there was no actual bamba snack on the bamba flavored doughnuts.

But hay, that’s ok, I think it's pretty enough this way too. And I'm not sure I would've love the texture of the puffed corn snack mixed with the softer fluffier doughnut.


Texture-wise the filling of this doughnut was very much like that of the cheese cake one. It had a thickish custard-like feel to it.


I thought the bamba doughnut was enjoyable and an original flavor for a doughnut.  Something about the gelatin-like texture of the flowers on top bothered me a drop. They must have added something to the mixture to help the flower shapes stay put and it slightly changed the taste and texture, not enough to ruin the doughnut for me but still something small I thought worthy of mentioning. 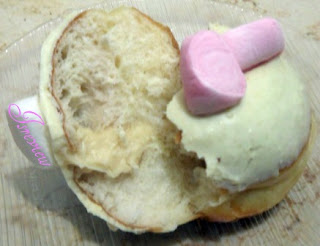 I was slightly disappointed when I realized that the filling of this doughnut was not a marshmallow fluff or made with marshmallows at all. Instead it's actually filled with a white chocolate cream, which was sweet and tasty. I enjoyed it, but given that it's being called the "marshmallow doughnut" I was anticipating a marshmallow related filling.


The other thing that slightly disappointed me was compared the other two doughnuts I just tasted, this one had a lot less filling in it. I'm not sure if that’s random or maybe it's because this white chocolate filling is that much sweeter than some of the other fillings so they chose to put a bit less of it in the doughnuts.


What gave this doughnut its name are the mini marshmallows that are placed on top of the hardened white chocolate ganache coating. I guess from sitting in the open air, the outside of the marshmallows hardened a bit. The hardening added a gummy-like texture to the marshmallow. I enjoyed that.


As a whole I liked the combination of the white chocolate ganache, white-chocolate cream filling and marshmallows, but it was very sweet. I think kids of all ages that enjoy super sweet treats will like this doughnut. 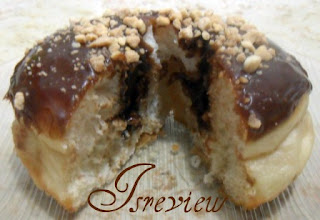 The store manager described this doughnut to me by saying "it’s our take on what a Ferrero Rocher chocolate treat might be in doughnut form".


Gianduja, according to Wikipedia, "is a sweet chocolate containing about 30% hazelnut paste…In addition to the classic interpretation of gianduja, modern confectioners often term any combination of nut, chocolate and sugar as a gianduja…" Now I understand why Ne'eman called this doughnut gianduja.


This doughnut, like the marshmallow one, also had a fairly small amount of the filling inside. That was a bit disappointing to me.


The sugared chopped nuts on top were a wonderful addition. The texture was perfect, not too hard yet still crunchy. I liked how they added a nice extra flavor and crunch. Mooi cookies should learn from Ne'eman how to make wonderful sugared hazelnuts that don’t make you feel like you might break a tooth on them. Ne'eman's sugared nuts worked perfectly with this soft and fluffy doughnut.


I really enjoyed this Gianduja doughnut. I was a bit surprised with myself that of all the doughnuts I tasted this was the one I was thinking about the next morning and it's the doughnut I suggested to my friend when she asked which one I thought she should buy. 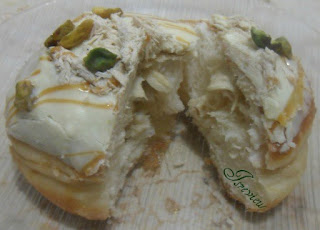 This Date Silan doughnut lived up to exactly what Ne'eman promised. It's flavored with chalva, white-chocolate ganache, date silan and pistachio nuts.


The filling is a very sweet chalva cream that I think Ne'eman uses in many of their chalva flavored pastries. On top of the doughnut they put white-chocolate ganache, shredded chalva strands, halved pistachios and a drizzle of date silan. All of the rich sweet flavors are clearly represented and yet, in my opinion, they work very well together. For the many Israelis that enjoy chalva, pistachio and honey flavors, this very sweet doughnut should be right up their alley.


I thought it was an original and creative combination of flavors for a sufganiyah. I liked it but it was a bit on the sweet side. I couldn’t eat too much of it. This time I got a nice amount of filling in my doughnut so with a hot cup of green tea a little went a long way for me, still it was an enjoyable treat.


Bottom Line: All the flavors I tasted really varied one from another and made the same basic and classic sufganiyah taste very different depending on the filling, coating and toppings. I thought Ne'eman did a good job coming up with flavors that work well together and with the doughnut. There seems to be a flavor for every palate. When I saw the ad I thought the cheese cake or the bamba flavored one would be my favorite but in actuality the one that I enjoyed the most was the gianduja doughnut.


If you try any of them let me know which you liked best. Chanukah Samach to one and all!!


Ne'eman's doughnuts range in price from 5.00-7.00 NIS depending on the fillings and toppings. When I bought the doughnuts they had a deal going of buy 5 get 1 free. I think that will continue throughout Chanukah but I am not 100% sure.