As I mentioned in yesterday's Ben Ami Baked Doughnut post they also had Baked Levivot. That’s actually what made me go to Ben Ami in the first place I had seen Ben Ami's head chef interviewed on TV talking about his baked levivot and I wanted to try them. They had two baked levivot; Sweet-Potato & Thyme and Swiss Chard/Mangold Leaves & Bulgarian Cheese. I thought they sounded interesting and wanted to try them.

Sweet-Potato & Thyme
I thought these baked mini sweet-potato and thyme levivot looked kind of odd and nothing like traditional levivot. That didn’t bother me enough not to try them and give them a fair shot. 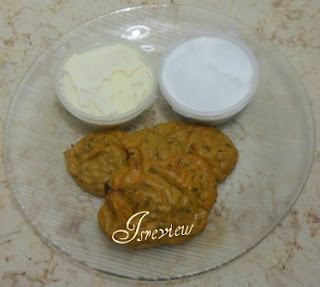 I thought they tasted more like mashed sweet-potatoes that were then baked for a few minutes. The middle had a creamy mashed potato texture yet the top had slightly hardened from the baking but not crispy the way I like my levivot to be.

I didn’t entirely dislike it, the sweet-potato and thyme flavors worked well together. I think they would make a nice side dish to a meat or fish dish but in all honestly I would have preferred it as mashed sweet potato not in a pancake form. I would have skipped baking it all together. I get that the chef was going for a levivah so I give him credit for the flavors and idea but I think as a pancake the texture needs a bit of work.


I thought the sweet potato levivot were ok alone and with the mustard aioli dip it came with but I actually most preferred it with apple sauce.


Each pancake was 4.00 NIS, given the size of these sweet-potato pancakes; 6x4.5cm, I thought they were overpriced and not worth 4.00 NIS a piece. 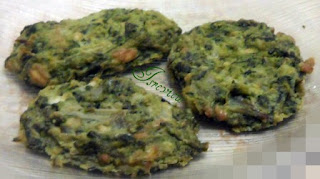 I thought the mangold leaves and the Bulgarian cheese work well together. It didn’t seem to have all that much cheese in it but I did pick up on the cheese taste a bit. The mixture was well seasoned and enjoyable but I felt like I was eating a side of vegetables and not a pancake. Not only because it fell apart so easily but more because of the overall taste and texture. It was not crispy the way I like my traditional levivot to be and it wasn’t even soft or pancake-like either.


I give the chef credit for his creativity and for trying to come up with baked levivot options, but mostly I give him points for the taste of the mangold/Bulgarian cheese mixture. I just have a hard time calling them levivot. It was more of a somewhat formed vegetable and cheese mixture, so not a pancake per se but still enjoyable. 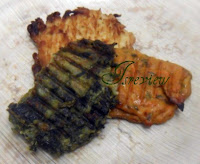 Update: the next day when I re-warmed the leftovers of both the sweet-potato and mangold levivot in a Panini press it added a nice crispy coating to the pancakes that the regular oven didn’t seem to give them. The Panini press changed the taste and texture enough for me to consider them both levivot. I much preferred the levivot like this.

I should add that I was shocked to see how much of an oil-like substance emerged from the mangold pancake in the press. It didn't taste too oily when I warmed them in the oven but I guess either the chef added a lot of oil or maybe it was from the Bulgarian cheese, either way it surprised me. If I buy these Ben Ami levivot again over Chanukah I will definitely warm them in the Panini press and not in the oven.


Traditional Potato Levivot
Ok so these are fried and not baked but they looked so good, I couldn't resist trying them too. I'm very glad I did because I really liked Ben Ami's traditional potato levivot. To me they didn't taste mass-produced at all. They had a homemade taste and texture to them. I give Ben Ami tons of points for that. 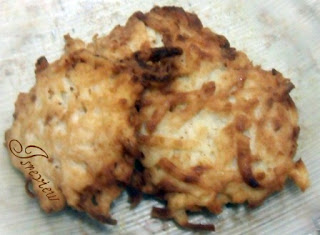 I know many people like a lot of onion in their levivot, I do not, so I was really happy that these potato levivot did not have a strong onion flavor at all. I'm not sure if there was even any onion in them at all, but I guessing it must've had some onion in it. Still I was thrilled that it wasn't a strong and obvious onion flavor. I really enjoyed the "pure" potato taste. I think most people would say they needed a bit more salt but I prefer it slightly less salty so I can either add salt on my own or use a dip to add flavor. They worked well with both dips Ben Ami gave with them but again I personally preferred to dip them in apple sauce.


If and when I have made potato levivot I too shred my potatoes like that, so I really enjoyed the shredded potato look and texture. I think it adds to the taste and "homemadeness" of the pancake.


These potato levivot were a bit bigger than the baked ones they were about 8x8 cm. they too cost 4.00 NIS a piece.


Nana Yogurt Dip
I clearly tasted both the sourness of the yogurt and mintiness of the nana. I didn’t love or hate this dip. It was a nice combination of flavors and a creative addition to the pancakes but it wasn’t my favorite choice to eat with levivot. 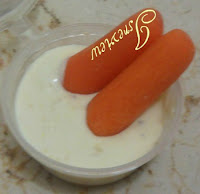 The Mustard Aioli was also exactly what I expected it to be a mustard mayonnaise-type dip. It had quite a strong mustard flavor. I liked it better than the yogurt nana dip with these pancakes but much preferred it as a dip for the baby carrot sticks I told you about the other day and less as a dip for these levivot. Somehow apple sauce, I had bought separately at the supermarket, was the dip I personally enjoyed most with all three of these Ben Ami levivot.

1 Levivah 4.00 NIS
If you need a larger amount of levivot Ben Ami sells 20 levivot for 79.00 NIS but I think you will have to pre-order them.