When Ya'aqov over at Esser Agaroth blog mentioned his Krembo Challenge Caravel it sounded like a cool idea to me. Then when he suggested that I may want to do a comparison between different brands of Krembos I thought that would be fun and interesting. So even though I don’t have a new Krembo to tell you about, I do have a fairly detailed comparison between Rio, Feldman and Strauss's vanilla and mocha Krembos.


In a way it may actually be a good thing that there isn’t a new Krembo flavor to post about because the one time I did find a creative new Krembo to review; the sour/courage Krembo, it was so awful that I'm not at all surprised they disappeared off the shelf really quickly.

When I mentioned this Krembo challenge to a friend who lives in the USA she too thought it was a cool concept and wanted to get in on the fun. I was thrilled and grateful for her two cents/esser agaroth worth.

Given that she had not eaten a Krembo in over 10 years (she remembers having them as a Chanukah treat in the US when she was younger. I don’t remember seeing/tasting Krembos until I moved here to Israel) In any event, I thought adding her opinions would really give a fresh twist to this post. 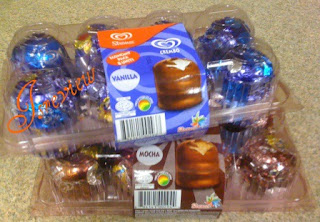 She kindly brought a package of both the vanilla and mocha Strauss Krembos at her local supermarket. When she sent me a photo of her purchase I found it interesting that Strauss spelled Krembo with a "C" Crembo. I myself wasn’t sure how to spell Krembo but if I have to choose between trusting Wikipedia's spelling or the spelling of an Israeli company I absolutely choose to trust Wikipedia.

We all know that local Israeli companies can be very creative when it comes to spelling English :) To see some fun examples head on over to Toby's fun blog A Time of the Signs and have chuckle or few.


Since this post is not a spelling lesson let's get into the real reason we are here and start comparing the krembos. 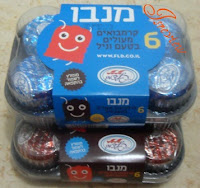 Feldman, who named their Krembo Manbo, suggests on the package that you store them in the freezer. My friend and I decided we would taste the kermbos at room temperature, refrigerated and frozen to see if they taste different, and if so, which one we prefer.

When my friend first tasted Strauss's vanilla krembo at room temperature she picked up on a slight coconut flavor she said it was even more intense and enjoyable when she ate the krembo frozen. I can't say I had ever noticed that before so I tasted it again looking for the coconut. I do know what she's referring to but I don’t think I would have picked up on it on my own. Maybe it was a little mind over matter that made me taste the slight coconut flavor once she mentioned it. 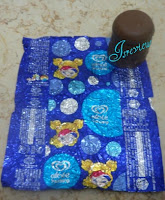 We both agreed that refrigeration, for a few days, did not really affect the taste or texture of Strauss's krembo. But the freezer did have an impact on them. As my friend put it "after the Krembo was frozen the normally ultra soft & fluffy cream filling becomes a much more enjoyable bite. Not too mushy,yet still soft and creamy enough" I completely agree with her and liked the gooey chewy texture of the "frozen" krembo. I also think that the freezing somehow curbed the ultra sweetness of the cream and I much prefer it that way.

I should mention that the cookie does become somewhat harder and crunchier when frozen. My friend preferred the cookie crunchier, she found the soft cookie too soft for her taste, but me, I kinda missed the softness of the room temperature cookie still I didn’t dislike the frozen cookie. I think it worked perfectly well with the texture of the now "frozen" cream.


All in all my friend thought the room temperature and refrigerated vanilla Strauss krembo was "eh eh" but frozen she said "it was a smooth refreshing little bite to enjoy." Her kids, who were tasting a krembo for the first time, really liked it. Her 6 year old put it simply by saying "it kinda tasted like a cookie with marshmallow fluff and chocolate" ;) Hay, what could be bad about that for a 6 year old? Her 3 year old who tasted and liked the non frozen one a week ago, took a bite of the frozen one today and said "it tastes more yummy than last time":)

Not being a huge fan of coffee or coffee flavored treats I wasn’t surprised that I didn’t love the mocha krembo but my friend, a coffee drinker, said she too didn’t really care for Strauss's mocha krembo. She summed it up by saying "I wasn't crazy about the room temperature mocha flavored krembo although they weren't AWEFUL. Frozen, it was much less intense, so I liked it. Still, of the two frozen krembos, I much preferred the vanilla krembo over the coffee one."


In that case it’s a good thing she didn’t taste Feldman's Mocha krembo. The coffee flavor was way way more intense and I really didn’t enjoy it at room temperature. Frozen it wasn’t as horrible but still, I didn’t really care for the strong coffee flavor.


As a whole I thought Feldman's krembos were sweeter than Strauss's, not that Strauss's aren’t ultra sweet, they are, but these seemed even more sweet! I also picked up on what seemed to be a thin layer of granulated sugar that must have settled between the cream and cookie base. I really did not like that. I noticed it in all three temperatures but it bothered me most at room temp. 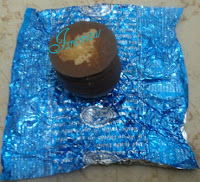 Feldman's cookie is slightly crunchier and less soggy than Strauss's. For some reason I prefer the softer cookie with this treat. I thought the Feldman cookie base was a little too crispy for a krembo.

Feldman's chocolate coating seemed a little waxier than Strauss's but I think all krembo chocolate is waxy to some degree so the difference didn’t bother me too much.


Rio's Krembos come in both flavors as well but given that I could only find them in a 16 pack of krembos I decided to only buy the vanilla ones. I had so many krembos in the house at this point. Since, like I mentioned, I don’t love mocha flavor to start with I thought 16 more mocha krembos was just a little overboard :)


Rio's vanilla krembos had the thickest cream of the three. That didn’t bother me and I think I may have even preferred the heavier cream. Especially in the frozen one where it gets very gummy-like and super chewy. I should add that after some two weeks in the refrigerator Rio's krembo did get somewhat more gummy-like. I guess it was halfway between the room temp. krembo and the frozen krembo. I liked the refrigerated one better than the room temp. one but not as much as the frozen one. Maybe 2 more weeks in the refrigerator and it will be as though it had been in the freezer. 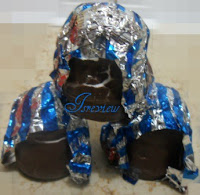 These Rio Krembos seemed just as sweet as Strauss's vanilla krembos, not overly sweet like Feldman's, but still plenty sweet. The cookie that Rio used was crunchier and thicker than both of the other ones I tasted. I didn’t love that but didn’t hate it either.

What bothered me most about Rio's krembo was the poor packaging of the individually wrapped krembos. The foil wrapper is technically large enough to fit these krembos but for some reason who ever wrapped the krembos did a very sloppy job and did not completely cover the whole treat. That really bothered me. Just a little more effort on the part of Rio's workers and this would not be an issue.


My friend cleverly pointed out that it would've been nice to have a mixed pack of krembos so we didn’t have to buy so many of each flavor. But I guess the companies make more money this way so they don’t really want to offer a mixed pack. Maybe at some point they will add a mixed pack. I guess we will wait and see.


This post would not be complete without a price comparison as well so here's the rundown...

I should mention that Strauss also has a 40 pack and that was 39.99 NIS at all the stores I checked.
I was a bit taken aback at how expensive they were in the US. Both my friend and I thought that a fair price would be closer to 25 cents apiece. I've noticed that other Israeli exports are often the same price or cheaper in the US. I guess krembos don’t really have a competitor in the US so Strauss thinks they can hike up the price and charge whatever their heart desires.


I was semi shocked to see that the local convenient store I stopped at the other day was charging 2.50 NIS per krembo and a candy stand in the mall wanted 3.00 NIS apiece. That's simply highway robbery and they shouldn’t be able to get away with that!


Bottom Line: My friend and I both preferred Strauss's krembo frozen and we didn’t really like the mocha ones at all.

I didn’t particularly care for Feldman's vanilla Krembo and absolutely did not like their mocha one. I would skip Feldman's altogether.


That leaves me with a choice between Strauss and Rio's, I didn't think that Strauss's vanilla Krembo was that much better than Rio's vanilla one. I personally would not say Strauss's krembo warranted the much higher price. Taking taste, texture and price into account I would choose the Rio Vanilla Krembo. Even though I don’t normally need 16 krembos at a time I would still get Rio's box. I would make sure they are wrapped well, and stick them in the freezer for the next time I would have brought them anyway.


For right now I think I had enough Krembos until next year:) Chanukah Doughnuts anyone???


Disclaimer: All items were purchased by me or my friend. No one is paying us for this review. All opinions are mine and my firend's.
Posted by Isreview at 11:20 AM