When my friend stopped by the other night with a Chanukah treat; a package of Levivot from Roladin I was excited and yet surprised. I had no idea Roladin sold levivot. There was no mention of them on Roladin's website and when I had been to Roladin to buy the Chaser doughnut I didn't see any levivot on the menu or in the takeaway counter refrigerator. Maybe not all the branches carry the levivot? I was delighted that the store she was in had them and she was thoughtful enough to pick up a package for me.

I had learned my lesson from the Ben Ami Levivot and instead of warming them up in the oven I warmed them in the Panini Press. Aside from how quickly they would be ready to eat I knew I'd get a crispy outside and soft inside without having to wait too long or add oil and fry them.

Given that they are made with sweet vegetable (sweet-potato and carrots) they were naturally a somewhat sweet pancake. I clearly tasted each vegetable and I thought all three flavors worked very well together. 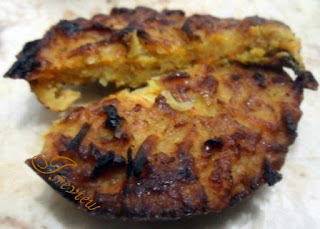 I liked the size of the levivot; each one was about 7.5cm in diameter and about 1cm thick. I thought two or three pancakes would make a nice portion or side dish.


Some might say the levivot needed more salt but I prefer when food is less salty to start with so everyone can add as much or as little salt as they like to their portion.

The package says there is onion in the mix but it wasn’t overpowering or too strong for me, that’s a good thing.


Bottom Line: I liked Roladin's Sweet-Potato/Carrot/Potato Levivot. I was glad they didn’t taste completely mass-produced. They fell somewhere between a homemade taste and store bought/restaurant version. So if you like a bit of sweet touch to your potato levivot check your local Roladin. If you don’t see it in the refrigerator maybe ask them if it's possible to preorder a pack or two before Chanukah is over.


Update: Upon closer examination of the packaging I noticed that these levivot are not actually made by Roladin but rather by a company in Nir Etzion that makes prepackaged homemade-style foods that are sold in some supermarkets and specialty stores and apparently they now make levivot for Roladin as well:) That could be the reason I didn’t see any mention of these levivot on Roladin's site and could not find them in all of Roladin's branches .


If your a fan of Krembos check out the
Carnival Of Krembos Ya'aqov over at
Esser Agaroth blog put together
I was happy to take part in it this year:)
Posted by Isreview at 11:44 AM