I know peanut butter and chocolate combos are not new to most of the world but somehow it feels like the Israeli companies just noticed it and realized how well they work together. I for one am a huge fan of the peanut butter/chocolate combo so I was very happy to try this new peanut flavored Klik snack. 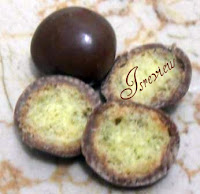 The small bamba chocolate covered Kilk balls lived up to exactly what Klik promised. The puffed corn snack was crunchy and fresh and a wonderful base for the milk-chocolate coating. 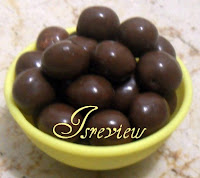 Bottom Line: I think this peanut butter corn crisps coated with milk-chocolate snack, as Kilk called them, is a wonderful addition to Klik's full line of snack bags. For me personally I would have liked it to have a bit more of a peanut buttery taste. I think that would be a better contrast to the milk-chocolate, still as is, I thought it was enjoyable treat.

Update: The ad running on TV for this Kilk snack is kinda cute,
you're sort of invited to the wedding ceremony of Kilk chocolates and peanut butter snack (bamba) because they make such a perfect/sweet match.
Here's the Chuppa ceremony:)